Catch the roasting contest between Government and Opposition MPs. 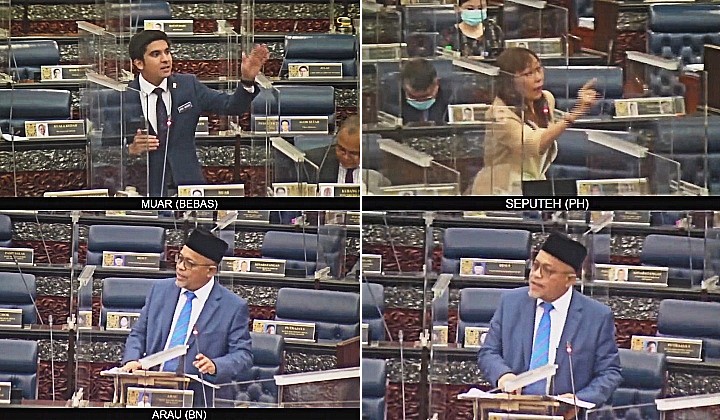 This was when several other MPs jumped into the frame, most notably being Baling MP Datuk Seri Abdul Azeez Abdul Rahim, who acknowledged Khairuddin’s savior status and claimed that the minister had managed to bring in some “RM82 billion” in supposed earnings for the country.

During which, Abdul Azeez had also told Syed Saddiq not to act like a child, calling the 27-year-old Muar MP “budak kecik” in his quick remarks.

The political bickering later continued when Seputeh MP Teresa Kok came in asking for clarification from the government on whether Khairuddin’s visit to Turkey had been an official or private trip.

In reply, Abdul Azeez said that Khairuddin’s trip had indeed been for official government business, just before Dewan Rakyat Speaker Datuk Azhar Azizan Harun stepped in to put an end to the argument and make way for Shahidan Kassim to finish his speech.

Shortly after, while giving his final thanks to the rakyat for having abiding Covid-19 guidelines during the almost year-long pandemic, Teresa came to interrupt again with a comment implying that everyone was capable of following SOP, except for ministers.

This then prompted Shahidan Kassim to question Teresa on her remark, calling her an “amoi” in the process.

You can catch the roasting contest between the Government and the Opposition, yourself below;

In related news, the Dewan Rakyat will now have its own sign language interpreter to help Malaysia’s deaf and hard of hearing to better tune in on hot Parliamentary tea.

An interpreter from the Malaysian Association of Sign Language Interpreter (MyAsli) will now appear for Dewan Rakyat and Dewan Negara (State Assembly) sessions live on Radio Televisyen Malaysia (RTM) TV1, daily from 10 am to 12 pm.