Yes, you can still wear traditional costumes of other races. 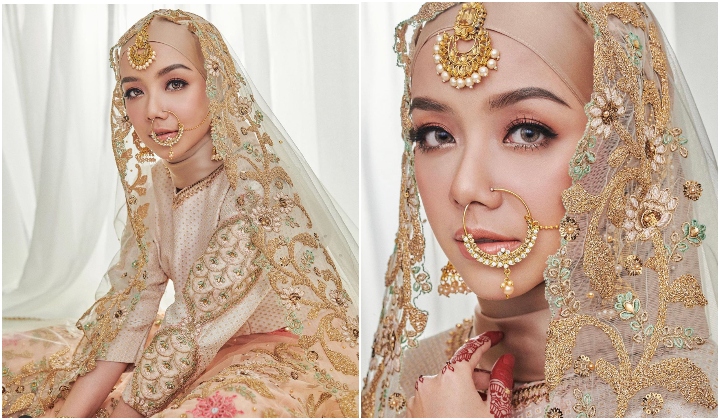 On the morning of the Maal Hijrah public holiday, Malaysian Twitter users woke up to a race-charged argument online. Local actress, model, host and entrepreneur Mira Filzah was being accused of cultural appropriation in an advertisement for coloured contact lenses.

A picture of the project posted on her Instagram account sees her clad head to toe in a gorgeous golden lehenga, complete with all the shiny jewellery usually worn by Indian women on their wedding day.

A screenshot of the picture was shared on Twitter, where user @eshwaaaaarya points out that Indian culture is being appropriated in the ad. Reactions to her tweet were conflicted.

Many Malaysians felt that the comment was unwarranted. After all, Malaysia is a multicultural country. Unlike the United States, all cultures that exist in our country are valued and celebrated. We’re an inclusive bunch that encourages each other to practice our cultures openly.

However, a few felt that having Mira Filzah, who isn’t Indian, posing in an Indian traditional costume is cultural appropriation.

Thankfully the matter resolved itself. Mostly from Mira who posted an apology. But also because information on the costume she wore came to light. It turned out that the costume was rented from an Indian Muslim shop, and that Indians had indeed been brought in and consulted on the project.

Yet, the conversation on Twitter also showed that Malaysians are divided on one thing – what is the difference between cultural appropriation and cultural appreciation? Does this mean we’re not allowed to dress up in costumes from other cultures in Malaysia? Is further segregating our culture something we really want right now?

These questions are understandable because cultural appropriation isn’t black and white. There is no clear line. But to put it simply, if a person of that culture tells you it makes them uncomfortable – you should probably listen.

Cultural appropriation is when you use certain aspects of a culture, without understanding why it’s there and how it’s significant. It’s like a white person saying ayam rendang should feature crispy chicken. Any Malaysian would be outraged by this, even more so if the white person then profited from crispy chicken rendang.

In contrast, cultural appreciation is when you are inspired by an aspect of the culture. You highlight this aspect and contribute to the well-being and preservation of the culture.

A simple example would be wearing the correct costume during a festival. Like, donning a baju kurung when you visit a Hari Raya open house. Wearing a cheongsam or samfu when celebrating Chinese New Year with your Chinese friends and family. And wearing a saree when invited to a Deepavali celebration.

If it’s in business, just simply using a model of the correct race and culture you’re showcasing is the safest and best way to go.

This shows you not only understand the culture and the significance of the costume but that you also respect the people of that culture and want to highlight them as well.

Yes, of course we can still dress up in a saree or a samfu or a kebaya. I believe you won’t find a single Malaysian who will say you look ugly in their traditional dress.

Becoming more aware of how you might be oppressing a community isn’t a bad thing. It’s just admitting that we might have made a misstep so we can correct it in the future.