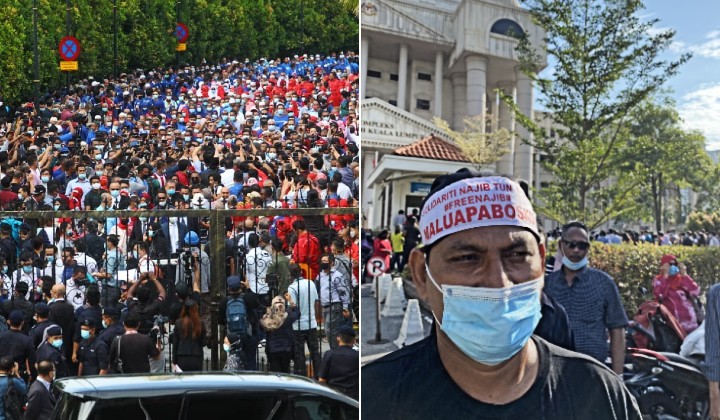 The mob of #bossku supporters massed at the KL courthouse in solidarity of former Prime Minister Datuk Seri Najib Razak’s trial on Tuesday (July 28) is raising concerns among Malaysians.

As the whole country focused its attention on the proceedings of the country’s most controversial court case, people can’t help but call the mass gathering of people, during the height of the Covid-19 pandemic, a huge red flag.

Taking their anxieties to social media, netizens laid their criticisms that the event was against “new normal” standard operating procedures (SOP).

People pointed out that the crowd of supporters can be seen ignoring social distancing rules, with some of them not even wearing face masks.

67 yr old Najib Razak has arrived as supporters cheered . Many are kept outside Duta court complex as only those with valid passes are allowed in. Social distancing is non existence . Many aren’t even wearing masks 😷 #COVID19 pic.twitter.com/Vvex7331u7

Netizens have even taken to giving the crowd grim nicknames like the “makhamah cluster” or courthouse cluster, fearing a spike in coronavirus cases in the coming days

The event reportedly even has public officials worried, with the Health-Director General Datuk Dr. Noor Hisham Abdullah himself expressing grief over the day’s turnout.

It is said that over 1,000 people had gathered from as early as 6 am to show support for the former premier.

Apparently police had warned the attending crowds to abide by Covid-19 guidelines, but from the looks of it, we could probably take a guess on how things went.

Following the trial, Najib was convicted of seven criminal charges involving abuse of power, breach of trust, and money laundering.