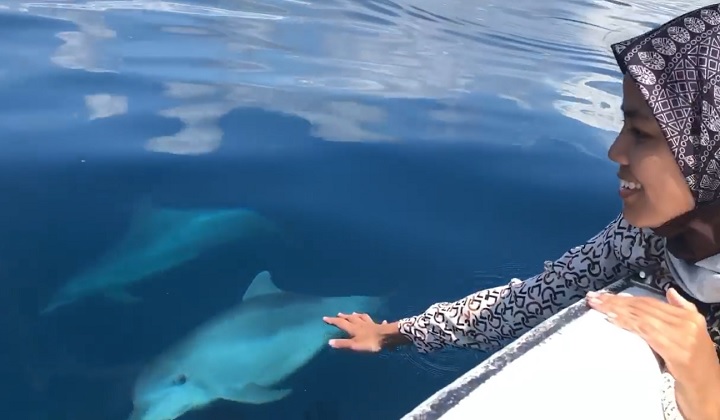 The sight of dolphins is always a delightful one, especially when there’s 20 or so playfully chasing along your speeding boat while on the open sea in Tioman.

This is exactly what Mohd Faisal Safuan Saridan and his wife Nurul Huda Sani experienced when they were on a boat travelling from Kampung Tekek to return to Kampung Juara on 22 July.

Faisal, a resort manager who grew up on the island, told Bernama that the sight astounded him as he had only ever seen dolphins in the waters four times in his life.

I spotted what looked like a pod of dolphins from afar and immediately decided to try to approach them even though knowing they would most likely swim away. I did not expect there were so many of them, around 20.

What’s more, this was the first time the Tioman Island native encountered such friendly dolphins in a large number. All his other encounters with dolphins on the island were from afar as the dolphins would flee once they sensed a boat nearby.

This time, it was different.

According to Faisal, the dolphin pod was surprisingly unfazed by their presence and continued frolocking, swimming along with the boat and even playfully nudging Faisal and Huda’s fingers brushing the water surface.

Thrilled by the dolphin encounter that went swimmingly well, the couple uploaded three clips onto Facebook, which have garnered over 3,000 views.

The bottlenose dolphin is a known marine mammal species in Peninsular Malaysian waters, especially around Penang, Johor and Pahang.

However, researchers have noted that there has been little data on the status of marine mammals in the nearshore waters of Peninsular Malaysia, noting that while interest has grown high in recent years, funding difficulty is a major limitation.