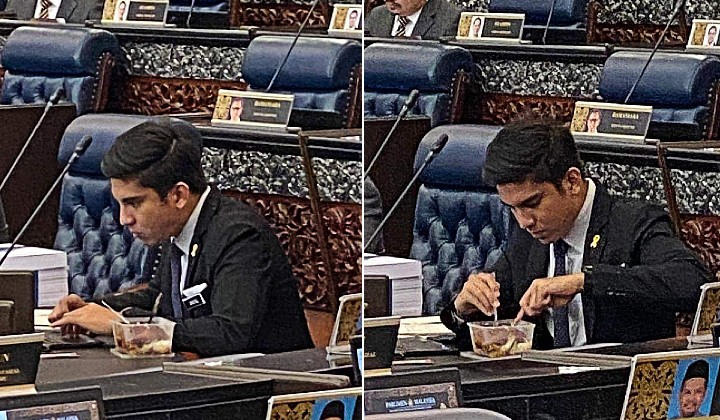 The pictures show the Muar Member of Parliament (MP) sneaking a quick tapau meal at his chair, supposedly during a session of the Second Meeting of the Third Term for Parliament 2020.

The snacking statesmen had apparently annoyed a number of netizens who couldn’t quite swallow the MP’s actions, stating that it was unparliamentary and in disrespect of the Dewan Rakyat’s protocols.

Meanwhile, other social media users came to the MP’s defense, saying that there was nothing wrong with the politician grabbing a bite during a Parliament proceeding.

There are bigger issues going on with the parliament like grown-ups acting worse than preschoolers, racism and bad lighting and ministers not wearing masks during this ongoing pandemic. Then there’s you, judging @SyedSaddiq cause he’s hungry https://t.co/ganTfd8qWp

Lol… the past couple of days have shown me that meleis just don’t wanna see @SyedSaddiq eat. LEAVE THE MAN ALONE. At least he’s doing good for out society, he deserves basic needs. The only contribution y’all making is to hate online. Get your ashy self outta here 👀 https://t.co/LcLVGdsCHG

So is it wrong to be eating inside the Dewan Rakyat?
Short answer, no not really, according to the Standing Orders.

A quick look at the Standing Orders of the Dewan Rakyat will note no specific restrictions against bringing food and beverages into Parliament, nor are there rules against eating during a Dewan Rakyat proceeding.

However, we have yet to hear from the Dewan Rakyat Speaker whether Syed Saddiq should’ve brought enough food for everyone, or sit outside the hall to finish his meal.