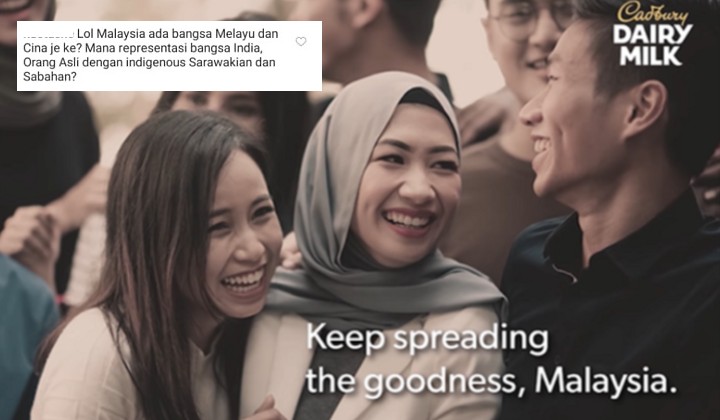 Cadbury Malaysia was the subject of ridicule on Instagram after Malaysians noted the absence of the Indian community in a short clip celebrating the goodness of “everyday Malaysians”.

The advertisement titled “Salute the Goodness” quickly went viral for the wrong reasons after it was posted on Instagram on 6th July with several comments by Malaysian Indians who called out Cadbury Malaysia for the lack of representation of Malaysian communities.

Share your generosity story and join us as we #SaluteTheGoodness of Malaysians — from the heroism of frontliners to the selfless gestures of everyday people. Tag @cadbury_my, use the hashtags #SaluteTheGoodness #GoodnessInEveryone #CadburyGenerosity and let’s keep spreading the goodness today!

Aside from the absence of local Indian faces, many commenters also pointed out missing East Malaysian and Orang Asli faces in the Instagram video that appeared to centre on Malay and Chinese Malaysians.

Following the barrage of angry comments, Cadbury Malaysia followed up with a comment to clarify that Malaysians not have been “fully reflected in the end result” of a shortened Instagram video but that the full version of the advertisement was available on YouTube.

Mondelez Malaysia’s corporate and government affairs head Raja Zalina Raja Safran told Malay Mail that due to limited space size, the video that was posted on Facebook and Instagram was trimmed, thus disabling the entire presentation.

She asserted that the original advertisement has all the races featured and that the brand will “strive to do better in celebrating the diversity of our Malaysian culture and heritage.”

However, many were still unimpressed by the statement, calling for action by the company to rectify the oversight.

Watch the full advertisement below and let us know what you think: