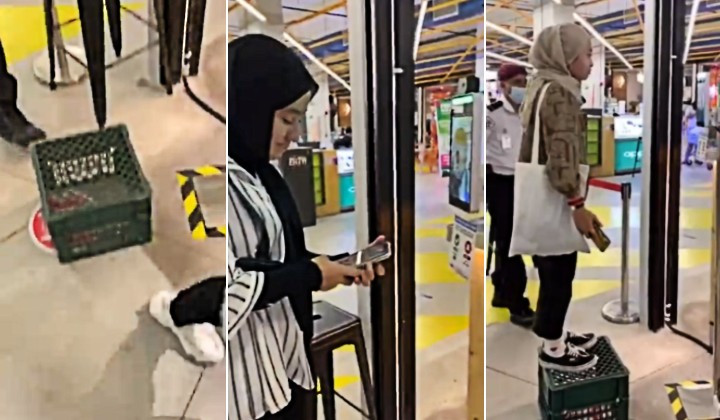 As Malaysians quickly adapt to the new normal, it looks as though adhering to Covid-19 guidelines might be a tall order for some people.

In a series of videos making rounds on social media, a couple of, shall we say, “vertically challenged” Malaysians share the extra help they needed to undergo mandatory temperature checks at a local shopping centre.

The videos, each being no less than a few seconds long, showed two separate ladies having to stand on a plastic crate in order for them to be the right height for the mall’s automated non-contact digital infrared thermometer or temperature scanner to record their temperatures.

Speaking to TRP, Twitter user win, explained that before being forced to utilize the highly advanced height correction tool, she had already come to the conclusion that scanner was a bit too tall to detect her particular height, but was reassured that it would work by the security guard manning the station.

However, after making several failed attempts by having to tiptoe herself and even jumping in front of the machine, she was finally handed the booster basket, which was already made available there on hand, to make her day easier.

The same was said by Twitter user Mia Sara Nasuha, who although felt a little insecure over her shortcomings said that she did enjoy the humor behind the whole ordeal.