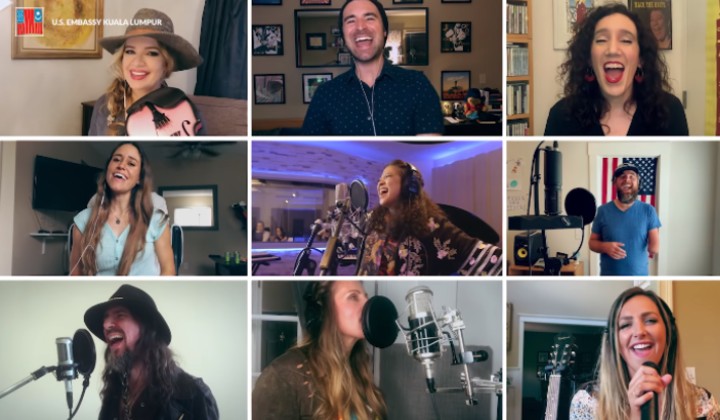 To commemorate the United States’s (US) Independence Day a.k.a., the 4th of July, the US Embassy here in Kuala Lumpur has a special musical treat to celebrate the relationship between our two nations.

A special rendition of Ella’s Standing in the Eyes of the World – a song made popular in the 1998 Commonwealth Games – was made as a tribute to the spirit of cultural exchange between Malaysia and the US and presented via music video on YouTube.

It features local artists like Zee Avi and the Queen of Rock; Ella herself, along with alumni from the American Music Abroad program, a percussionist from the US Air Force Band, and even hard rocker and Guns N’ Roses guitarist, Ron Thal.

The song was remixed to transition beautifully between Bahasa Malaysia and English, sang in a soulful symphony accompanied by traditional Malaysian instruments.

And in true “new normal” fashion, the entire video was mostly composed of shots made by artists from the comforts of their own home.

US Ambassador to Malaysia Kamala Shirin Lakhdhir said that the collaboration highlighted the history and cooperation of the two countries while transcending borders to bring people together.

You can catch the full video, here;

Source: Ella’s ‘Standing in the Eyes of the World’ given makeover in US-Malaysia video in conjunction with US Independence Day (VIDEO)
Tags
Malaysia social media US embassy video YouTube