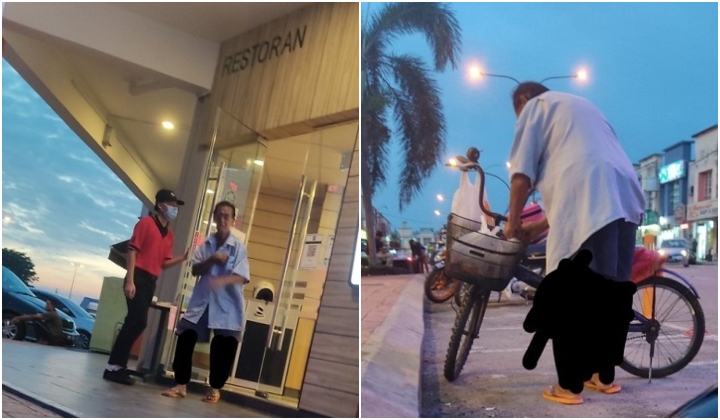 A young Malaysian’s unexpected encounter with an old man at a fast food restaurant in Dengkil, Selangor has caught attention online as a reminder to be kind and help those in need.

Twitter user Raja Farah Sofea took to the platform to share her story on how she overheard the conversation between an old chinese uncle and a KFC employee at the restaurant.

The old uncle had asked the employee if there was anything he could get for RM10, but the employee replied that a snack plate with chicken is RM16.

According to Farah, the old uncle then turned to leave on his bicycle but she went up to him and struck up a conversation.

The uncle revealed to her that he had intended to buy a special meal for his grandchild but couldn’t afford it.

Struck by his words, the kind Malaysian promptly bought him a meal. She told us that she felt that it was her responsibility as a human being to help those in need.

If one has enough rezeki (sustenance/blessings) to share, then one should be generous to others for in our rezeki is the rezeki of others.

Farah said that he was initially too shy to take her offer, but when she told him that rezeki shouldnt be denied he accepted her gift with a smile.

This simple gesture and tale of kindness took off on Twitter with over 18,000 retweets at the time of writing with many moved by her generosity.

When u can make others happy, u will be happy too ✨

You are such a kind hearted person. May Allah bless you. Thank you for helping the uncle.

Thank you for being kind to the uncle. We should learn this attitude.