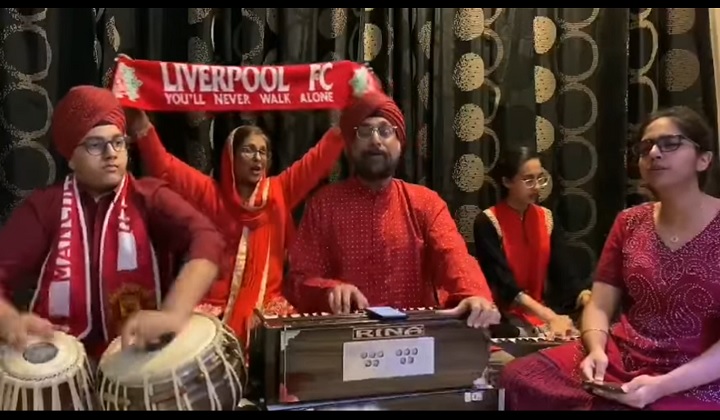 Jubilated by the win, Gurmukh Singh and wife Inderjit Kaur with their three children, Kavelnain Kaur (21), Gursimer Kaur (19) and Gurishver Singh (15) – sat down with their musical instruments and performed an Indian classical rendition of the English football club’s anthem.

Little did they know, it would soon garner them fans of their own from across the world.

The 5-minute clip posted on Sunday has since gone ridiculously viral with over 2,000 shares and 100,000 views (and counting) on Facebook. It’s even popped up several other social media platforms from the Liverpool FC subreddit to Premier League India sharing the clip on their Twitter account.

Gurmukh admits that his family are definitely feeling overwhelmed by the messages of support pouring in from across the globe. There’s texts and comments from Australia, United States, United Kingdom, Africa and even a call from an Indian newspaper keen on running the story.

The 54-year-old lawyer told us that he’d always wanted to do this classical mash-up, being both a lifelong Liverpool fan and trained in classical music.

I have been a fan of the Liverpool Football Club since I was 11 years old. The sheer joy and euphoria in seeing my childhood club lift this coveted Trophy after a 30 year wait prompted me to come up with this “gig”.

In fact, his entire family has been doing keertan (Sikh hymns) together for years and even did a Facebook live session for the Sikh religious festival of Vaisakhi during the Movement Control Order (MCO) in April.

This video was simply a happy confluence of timing and chance. Gurmukh, who has been toying with the idea since last year, finally found the right time with everyone at home.

But never in a million years did the Kuala Lumpur-based family dream of being such a viral sensation.

While the recording of this YNWA classical Indian mash-up may be a fortunate moment, the family’s incredible talent is clearly the reason for the thousands of shares.

Patriarch Gurmukh on the harmonium with his son Gurishver on the tabla laid the foundation of the song, while Gursimer’s dulcet tones led the vocals with her mother Inderjit and sister Kavelnain (also on keyboard) harmonising together.

Even their fluffy little dog Argon joined in the fun, weaving in and out as they celebrated Liverpool FC’s long awaited title win after 30 years with the classical sound of music.

Fans were also quick to notice Gurishver being the odd one out with a Manchester United FC scarf draped around his neck.

So my wife and daughters were with me on this. Gurishver agreed to play tabla provided he dons his Man United Scarf. He had to carefully balance being a cooperative family member and loyal fan of the Red Devils.

Even in the video, Gurnmukh admits that his son was not terribly pleased to sing a rival club’s anthem but was “very magnanimous and obliging.”

Perhaps one day, the family might return the favour with a classical Indian mash-up of “Glory Glory Man United”, but Gurmukh isn’t too sure.

For now, the family man simply hopes that Liverpool FC manager Jurgen Kloop and players enjoy the clip, with wishful thoughts of being flown to Anfield and given complimentary Grand Stand tickets to witness one of Liverpool’s matches.

Nonetheless, the family welcomes the well wishes while they continue doing what they love, together.

We were just having fun, you know. We are very much the simple folk whose primary love is to sing keertan, the praises of the Lord. We pray for the blessings and grace that we are able to continue to do this with humility.