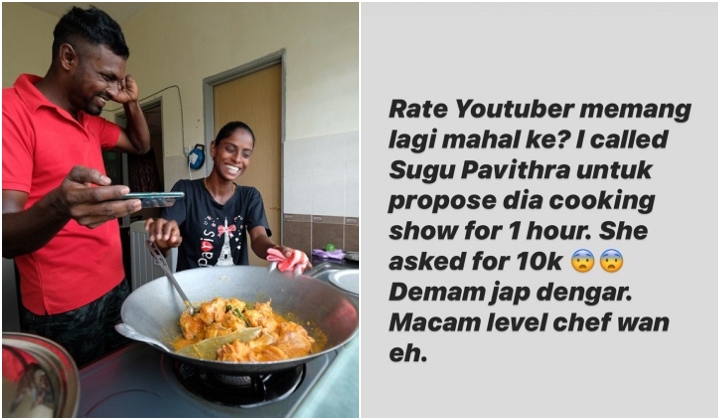 The internet was abuzz today about Malaysia’s favourite cooking couple, SuguPavithra when a TV producer made snide remarks over their RM10,000 appearance fee on Instagram.

On an Instagram story, the producer said she was shocked to hear the high figure after inquiring about the couple appearing for a cooking show.

Are YouTuber rates more expensive? I called SuguPavithra to propose a one-hour cooking show. She asked for RM10k. I felt feverish after hearing that. They’re on Chef Wan’s leveh eh.

The screenshot of the story immediately went viral on Twitter with Malaysians angrily defending the cooking couple.

How dare you shame her!
1. She’s freaking amazing.
2. She deserves 10k more than the other talentless tripe on ‘irrelevant’ air.
3. You act like you are doing her a favour-really?
4. Get up to speed- she is relevant, relatable and authentic! https://t.co/nFQjDqxRtd

Women have always underrated themselves in the work sector. So it’s good that Sugu recognises her worth and her right to ask for decent payment! Her skills are definitely worth more than RM10k! Go Sugu Pavithra!#WiraAWAM #AWAMEverydaySheroes https://t.co/NBnd2x3hm4

sugu pavithra got 700k subscribers and millions viewers. she carried the whole cooking industry in her kitchen during a damn pandemic. pay more to the queen! pic.twitter.com/zfae4L5vzX

As it turns out, Gempak reported that M Sugu and his wife, S Pavithra, did not want to be on any television cooking show, preferring to continue sharing recipes on their YouTube channel.

They told the Malay-language entertainment site that they’ve been inundated with interview requests and cooking show offers.

The couple also admitted to feeling especially overwhelmed since they do not have a manager and handle all these requests by themselves.

We don’t have that much time, except to take care of our family. So when it comes to parties that are quite intent on having us, we just give them a figure like that. In reality, we do not want to be involved in television programmes. If we can just focus on cooking videos to upload on YouTube, that’s enough.

Sugu and Pavithra quickly shot to fame in early May when their cooking videos on the SuguPavithra YouTube channel began gaining traction. Scores of Malaysians fell for the humble couple for their pleasing tutorials in fluent Malay and spick-and-span kitchen.

Even Prime Minister Tan Sri Muhyiddin Yassin is a fan, quick to send them gifts and even referred to them by name in his Short-term Economic Recovery Plan (PENJANA) announcement on 5th June.

To date, the SuguPavitra YouTube channel has over 700,000 subscribers with each video receiving more than 100,000 views.