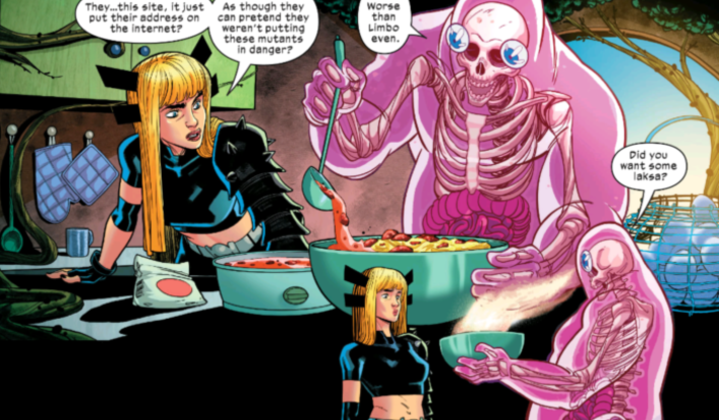 The greatness of Malaysian food has been recognised abroad again, this time being featured in the latest issue of an X-Men comic.

In last week’s issue #10 of New Mutants by Ed Brisson and Flaviano, characters Magik a.k.a Illyana Rasputin visits Glob, or Robert Herman at his home in Krakoa.

In the scene, Magik is asking Glob the current whereabouts of the New Mutants team. Unfortunately, Glob explains to her, they had left him behind while he was busy preparing a hearty dinner of Laksa for them.

In the strip, Glob can actually be seen preparing the Laksa while Magik is speaking to him.

And thats not all. The writers Ed Brisson and Flaviano also dedicated an entire page in the issue to Glob’s own unique vegetarian Laksa recipe. If you’re interested in trying it out, check it out below.

Interestingly, this isn’t the first time Laksa has made an appearance in an X-Men Marvel comic.

In issue #1 of Hunt For Wolverine: Mystery In Madripoor by Jim Zub and Thony Silas, Magneto himself recommends the popular noodle dish.

In issue #4 of the same comic, Jim Zub and Thony Silas feature another popular Malaysian dish – the Lepat Pisang.

If you were wondering why the X-Men are eating Laksa and Lepat Pisang, it’s because Madripoor, the country where they are depicted to be in is essentially the Marvel universe’s version of a Southeast Asian country.

But whatever it is, it’s definitely nice to see Malaysian cuisine being appreciated, even by fictional characters.

Types Of Laksa In (Almost) Every State In Malaysia