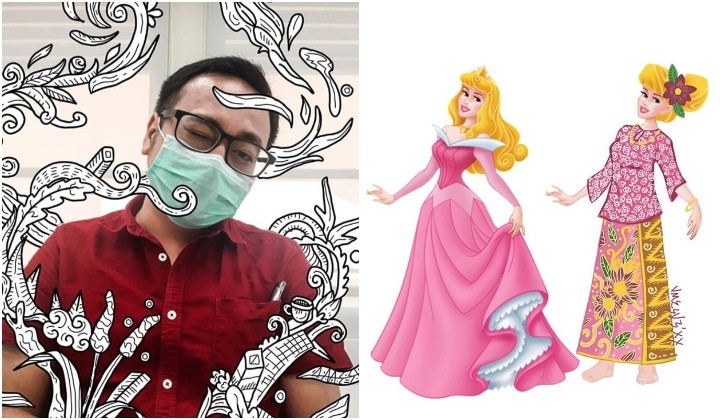 Amir Sabri is the 28-year-old Malaysian architect who is fast gaining popularity on TikTok for drawing Disney characters in traditional local attire like the baju kurung, cheongsam, and saree.

Speaking to Coconuts KL, Amir explained that he started doodling around 10 years ago.

Then, more recently, he was inspired to draw localised versions of famous cartoon characters by Indonesian artist Aprilia Muktrina who is also on TikTok and known better by her handle @heyapriliaa.

On 5 May, Aprilia had posted an online challenge after she herself drew Elsa, the character from Disney’s Frozen, in traditional Indonesian attire and shared a video of the drawing process.

She also drew other variations that included Disney’s Moana and Aladdin.

Seeing this, Amir (under his handle Do Da Doodle) drew his own localised version of Disney’s Polynesian princess Moana wearing a kebaya for Hari Raya Aidilfitri using the digital painting app Procreate.

Thanks a lot for your heartwarming response to my DisneyPrincesses + Malaysian Traditional Attires mashup. Done for Part 1.Will continue to do Part 2 later. As for now, hope you’ll enjoy my other doodles and artworks 😁🙏🏻

Amir uploaded a video of his drawing process on TikTok on 16 May, and the video has since been viewed more than 35,000 times.

I received positive responses from my social media friends. They asked for more traditional attires with all the Disney princesses.

Amir hasn’t confined his work to just princesses though and has since drawn several male Disney characters as well.

Since setting up his TikTok account in February, Amir’s most viewed video is his work drawing Princess Aurora from Sleeping Beauty in a pink baju kurung Kedah, which drew more than half a million views and counting.

Despite the higher views on his other posts, the Shah Alam raised architect considers his drawing Rapunzel in Minangkabau dress and Ariel in a Nyonya kebaya as his favourites.

My all-time favourite Disney princess is Rapunzel, my personal favourite (drawing) is Ariel, the little mermaid!

Although Amir has been getting a lot of attention for drawing cartoon characters in local attire, he admitted to Coconuts KL that these drawings aren’t as easy as his usual random doodles.

Amir shared that with his doodles, he just lets his creativity flow and draws everything that comes to mind, but he can’t do this with the Disney characters.

With Disney characters, I need to think first, about how to draw the attire, and how to deliver the best interpretation of the outfit.

Check out more of Amir’s impressive doodles on his Instagram.