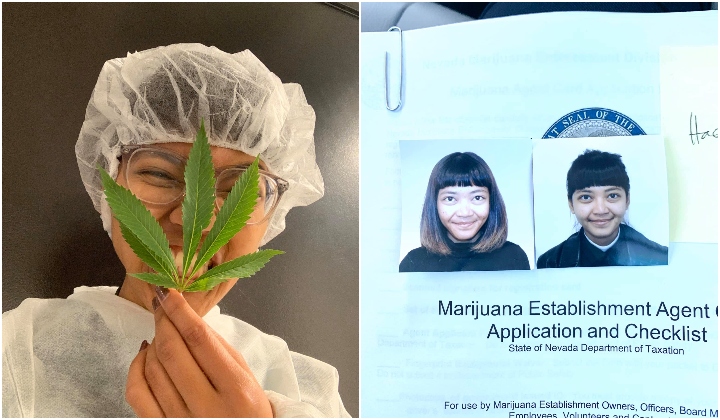 Hearing about Malaysians doing really well in various industries abroad isn’t something new. All of us know at least one person who has had some experience working overseas and the rest of us hustling back in Malaysia will always wish them the best in their endeavours abroad.

However, this might be the first Malaysian we’re aware of who is happily working in the marijuana industry in the United States.

Facebook user Hannah Fawwazah Nasaruddin recently shared her experience working in the controversial industry to her followers, which has stirred interest among Malaysians online.

My work as an officer who monitors the grade and quality of ganja products in the US. First-year anniversary as a compliance officer.

In her post, Hannah shared how it was recently her first year anniversary working as a marijuana compliance officer who monitors the quality and grade of the marijuana products in the US.

Clarifying that she does not test the marijuana by smoking it, Hannah said that she merely works around the plants as they grow and ensures that they’re compliant with the quality requirements.

She explained that the reason why she wants to share her work with everyone online is to inform and highlight the positive aspects of the infamous plant, adding that she’s confident that it isn’t impossible for Malaysia to use the same system to regulate the use of marijuana here.

Ganja can be regulated well and it won’t be used abusively if it’s industry is strictly and systematically controlled.

According to Hannah, 11 states in the US have legalised the recreational use of marijuana, while 33 states have only legalised its medical use. In California and Nevada (where she stays), it is legal to use weed both recreationally and medically.

In these two states, weed can be easily obtained at dispensaries. Only those 21-years-old and above are allowed to enter and buy weed at these shops.

Meanwhile, in states where only its medical use is legalised, users need to obtain a special card or a doctor’s prescription before they’re allowed to buy it.

Despite many states already legalising its use, the US still hasn’t legalised the plant at the federal level, which results in the industry being strictly regulated, even at the state level. Therefore, if you buy weed legally in California, for example, you can’t bring it across the border with you into another state.

Now that weed has been legalised in 11 states means that there is a lot of work opportunity in the industry, explained Hannah. Employment positions include being a budtender – the person who works behind the dispensary counters, cultivators – those that grow and cultivate the plants, or a compliance officer like Hannah.

Speaking more about her work experience, Hannah shared that her boss, a Latina woman from California, had initially hired her as a bookkeeper to manage the company’s accounts.

Hannah said that even though she hadn’t had much experience in accounting, she learned a lot on the job. A few months later, she felt like she wanted to contribute more to the company and took the initiative to attend courses and workshops on the cultivation of ganja and on how to use the marijuana seed-to-sale tracing system.

She eventually gained accreditation and her position in the company went up. According to Hannah, her boss said that now, she’s an asset to the company and in the industry because her position is not an easy one to get.

Hannah explained that although the weed industry may seem like a fun one, due to the strict regulations, it can be really hard to navigate.

Even the building needs to have a special licence to operate, which requires yearly renewals. And the licence is far from cheap.

Additionally, before an individual can work in the industry, potential employees must be put through an extensive background check through the state police department and the Federal Bureau of Investigations (FBI). Biometric fingerprints of employees are recorded and kept in the database.

Any potential employee with a criminal record, even if the crime was a minor one such as an unpaid summon would result in an rejected application. Only those with a clean record and accreditation are allowed to operate within the industry.

Hannah explains that the process is very similar to the one you go through when applying for a permanent resident status in the country. Which means that a record of her background and fingerprints are kept in the federal database used by the state police and FBI.

Once you’ve been successfully hired, you’ll be given a unique agent ID according to your department. For example, Hannah shares that she works in the cultivation building, and she also works in processing the ganja into its final product. Which means that she has two non-transferable unique agent IDs.

Even though we work in mountains of ganja, we can’t use any of it in the building or bring any of the product out. Basically, every action you do is recorded in detail by the system, and by all the cameras set up in the building. Each cannabis plant is also tagged with a unique serial number which is traced by the Metrc system.

The ID system is called Metrc. Every employee with an ID can be traced in the system, and the system will record and link that employee’s ID number with the cannabis plants he or she works on.

If you make a mistake in the cultivation of even one of the plants, the state government will send someone to the building to check on what went wrong.

Sometimes, the homeless will try to look for some weed that we’ve thrown out in our trash. They aren’t aware that we have mixed it all with bleach and sand so that they cannot be used anymore.

Hannah says that not even one leaf from a cannabis plant is allowed to be brought out of the building, even if it’s to be thrown away in the trash. And all their trash is disposed of in a special container which mixes their waste with bleach and sand to stop people from dumpster diving through their trash looking for rogue leaves or buds to be used.

That’s why there aren’t that many companies who can survive in the industry, and sometimes they decide to cultivate illegally out of their homes and then these products are sold on the black market.

Once the cannabis her company makes is harvested, it gets tested in the lab to determine it’s tetrahydrocannabinol (THC) and terpenes levels to ensure that the plant is safe for use. Hannah says that part of her job also includes ensuring that every product they make is tested in the lab.

Hannah explains that in her company, they cultivate the cannabis plants indoors and don’t need to use any herbicide. They also use organic fertilisers which come from plants like sugar cane. Her company also produces cannabidiol (CBD) products that don’t contain any THC, such as tinctures and topical lotions.

The industry is vast, and even lab positions to test ganja products require a degree. This is what differentiates this industry from the black market. On the black market, the products sold are not certified to be safe. These products might have fungus growing on them, or contain herbicides.

At the end of her post, Hannah clarifies that she now rarely uses weed. She shares that when she first moved to the US, the doctor changed her medication for depression to cannabis. One year later, she doesn’t need to be medicated anymore.

But, she says that her interest in the science of this unique medicinal herb will never fade, and hopes that someday it will become legalised at the federal level in the US and in Malaysia.

It’s not easy working in this highly regulated industry. I can say I love my job, and my job is so unique and I know this opportunity won’t come to me if I don’t have an open heart or not believing in science.