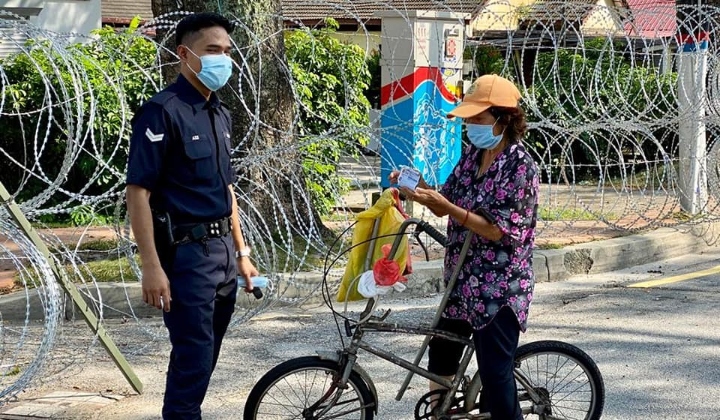 Our Malaysian Covid-19 frontline workers have been praised for really going above and beyond their scope of responsibility since the outbreak of the pandemic in the country.

The latest viral case is of a humble police officer who has helped a nice old lady pay her utility bills.

According to a post shared on the Petaling Jaya District Police Facebook page, Corporal Muhammad Azizi Matshah was approached by an elderly woman who asked him to help her pay her utility bills.

Azizi was with his team of law enforcement officers at Pasar Besar Jalan Othman with district police chief Assistant Commissioner Nik Ezanee Mohd Faisal to inspect the area which is currently under an enhanced movement control order (EMCO).

Based on a report by Malay Mail, Azizi’s colleague Lance Corporal Farhana Abu Bakar, who was also part of the group visiting the site, said that they were just about to leave and send Nik Ezanee back to the office when the old aunty approached Azizi for his help.

The ‘auntie’, who was pushing her bicycle, asked Azizi for help as her legs were painful.

Azizi asked Nik Ezanee for permission to help the elderly woman, and upon obtaining approval, proceeded to pay the bills at a nearby post office.

It seems that this isn’t the first time the team has been approached by aunties for help during the movement control order (MCO) period.

Farhana, who is attached to the district police station’s Crime Prevention and Community Safety Department (JPJKK) shared that another aunty had also approached them for help, recently.

Recently, another ‘auntie’ approached us for help as she said she was chased out by her son from her home. After giving her a meal, we sent her to the hospital for treatment.

The post has been gaining attention by Malaysians online, who have been praising the police officer for going above and beyond his duty, and the Royal Malaysian Police in general for their service to the country during this difficult time.

It’s no doubt that the incident is a perfect demonstration of Malaysian muhibbah, and the helpful and caring culture that we commonly espouse. Hopefully, we can see more of our people helping each other, especially during these uncertain times.Â