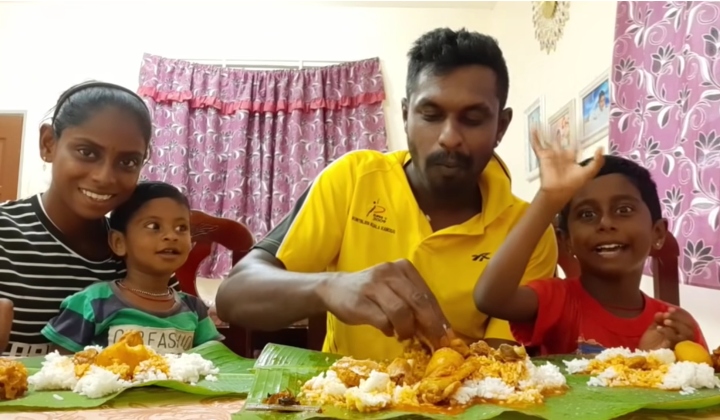 Boasting 388K subscribers in just a few months, the couple who is known affectionately as Sugu Pavithra, post videos that basically consist of the two of them cooking various local dishes together, while Pavithra narrates cooking instructions in fluent Malay.

The videos don’t include any fancy shots or creative transitions either, in fact, Pavithra told Bernama during an interview that she doesn’t even use a tripod while filming the videos on her smartphone. Instead, she just places it in a cup perched on a stable surface.

While her husband is cooking, she’ll sometimes hold the phone for him, and vice versa. She also edits the videos herself after eating the meal they cooked together, and when her two children are asleep.

Sugu Pavithra’s most famous video is their tutorial for chicken curry. Another fan favourite is Sugu’s stir-fry eggplant tutorial.

While the couple mostly cooks Malay style dishes, theyâ€™ve been getting more and more requests by Malaysians of all races for some Indian recipes instead. Sugu Pavithraâ€™s video on making Puri has over 500k views to date.

If you’re wondering why Sugu Pavithra’s videos do so well, it could be due to the fact that the humble couple is extremely soft-spoken and polite in their videos. Pavithra has also shared that she and her husband chose to share simple recipes that use commonly found items so that more people can benefit from their videos.

Living on an estate, Pavithra only had one wok, a spatula, and two pots including a rice cooker in her kitchen when she first started her videos.

With over 11 million total views and counting, Pavithra also shared that she chose to speak Malay in her videos so that Malaysians from all walks of life would be able to understand her instructions.

The two have undoubtedly been pretty viral, to the point where a Japanese YouTube couple, iChang RM, uploaded a video of themselves trying out Sugu Pavithra’s famous chicken curry recipe.

Speaking to Bernama in an interview, Pavithra explained that the first cooking tutorial she published online was for grilled tilapia.

I spoke Malay throughout the video. In just four days, I managed to get 5,000 subscribers on my channel and then I received an e-mail from YouTube to become their partner.

Their success as YouTube partners means that the humble couple is now allowed to monetize the content on the platform and receive a monthly income off YouTube.

But their success has not been protected by the usual internet fame drama, and the couple has been open about being cyberbullied by some who are supposedly dissatisfied with their success.

Well, we at TRP encourage them to ignore the haters and keep posting these awesome cooking tutorials!

This Can’t Be Real! Milo Suggests Putting Lemongrass, Spinach & Chilis In Your Drink

[Watch] How To Make A Milo Pudding With 4 Easy Steps