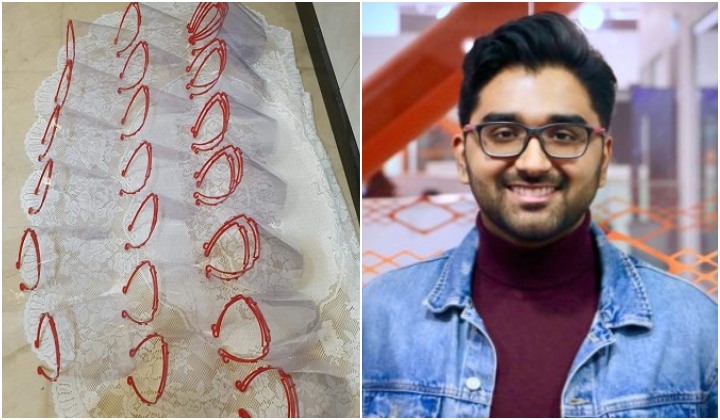 Meet Vishan Nair Birakasan, a Malaysian student whoâ€™s been keeping very busy during the Movement Control Order (MCO) -not with online classes, but with making personal protective equipment (PPE) for the frontliners as they battle the Covid-19 pandemic.

His story is so inspiring that it was even picked up by UK newspaper, Metro for their Everyday Heroes series!

Vishan told the British newspaper that he felt a responsibility to do his part to help the nation after images of local healthcare workers using makeshift face shields went viral. He then began making face shields using a 3D printer he had at home.

According to Vishan, it takes around 40 minutes to print each shield and another 20 minutes to punch holes into the acetate shields and assemble.

Luckily, heâ€™s not in this alone. Roping in his parents and siblings, the 24-year-old and his family have been hard at work assembling 3D printed face shields that are sent to hospitals via Grab.

In my home, it has been very much a DIY family effort: my dad punches holes, my mum rounds-off the corners of the visors and my 13-year-old brother joins me in the assembly stage.

3D printed, punched attachment holes, rounded the edges of the transparent cover, and finally finished assembling the face shields. There was a change in plans this morning as my batch will go to Pusat Perubatan Universiti Malaya on Monday as our team had reached our target of 100 for HPJ. 40 from my side. Doing what we can as individuals for our frontliners. Sharing some happy faces from HPJ too! 😇 #kitajagakita #malaysiacovid19 #malaysia #3dprinting #stem

Aside from the support of his family, Vishan tells Metro that he is also in a team of volunteers that have successfully distributed over 6,000 face shields to more than 40 hospitals and health clinics all over Malaysia, and a medical centre in Wales, UK as well!

He also admits that the PPE production and distribution is a collaborative effort, as Malaysian volunteers have been sharing tips and advice on 3D prints in WhatsApp groups. His teamâ€™s valiant efforts have also been receiving financial support via donations from kind-hearted individuals.

This experience has shown me the best of humanity. It transcends race, religion, and culture. It is amazing to see that kind of camaraderie, not only from Malaysians, but from communities across the world who have come together.

If youâ€™re wondering how Vishan is so well-equipped to make the PPE, itâ€™s because heâ€™s actually a rocket man!

The Masters in Mechanical Engineering graduate from the University of Sheffield actually made headlines last year when a rocket he created set a new altitude record at the world’s largest rocket engineering competition, Spaceport America Cup in the United States.

While heâ€™s currently doing his part to end the virus transmission by staying at home, the Puchong lad hopes to return to the UK for a PhD in Rocket Propulsion.