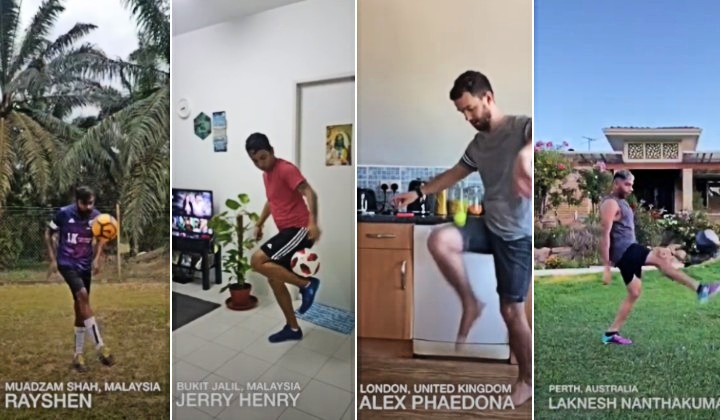 With lockdowns keeping people indoors, it takes some creativity and a whole lot of willpower to keep ourselves active, socially connected, and more or less sane in a pandemic stricken planet.

In the hopes of starting a viral trend and in trying to connect the world through the simple joys and love of football, a Malaysian amateur football team is challenging the world to a game of keepie uppie.

The Black Army Rovers Football Club (FC) is a team established by a bunch of Malays, Chinese, Indians, and British chaps who enjoy playing matches during the weekends, or so says the teamâ€™s short Facebook intro.

In an effort to show love and the beauty of the human spirit, the team invites football fans, fanatics, and players from around the world to showcase their juggling skills in a show of solidarity towards the global fight against Covid-19.

Through videos posted on the FCâ€™s social media pages, the team calls on football enthusiasts to stay at home and share their own awesome renditions of continuous kick-up clips.

The 2-minute video shows a mix match of clips advertising the different perspectives of players who do nothing more but balance a ball between one another with the power of movie magic, in a shared message of compassion and hope to the world. (Though we’re still a bit skeptical on the team’s choice in music…)

The #stayconnectedthroughfootball project features 25 dedicated football fans from around the globe, consisting of the teamâ€™s own members as well as players from rival teams.

So far the video has only received less than 500 views, but here’s to hoping that the fellas over at Black Army Rovers FC can get the professional teams to go at it as well.