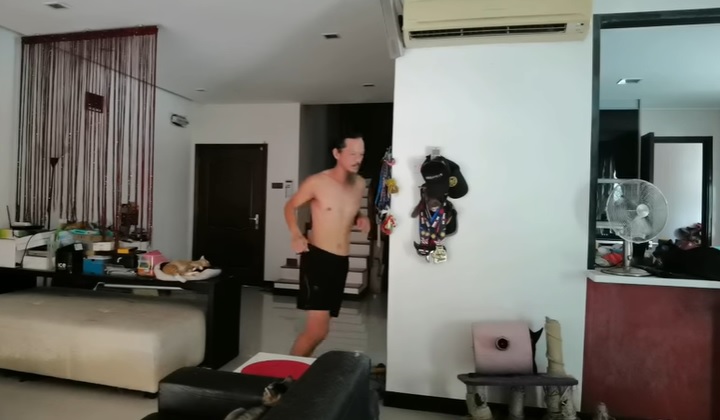 To all the die-hard jogging enthusiasts who just can’t seem to stay at home during the Movement Control Period (MCO), thereâ€™s no more excuses left.

Meet Yim Heng Fatt, the impressive Malaysian who completed a 263km marathon in his house.

Documenting his arduous journey on Facebook, Yim completed the marathon in 36 hours by taking a 50-metre loop around his house on repeat.

He often took breaks every 10 kilometres to play with his pet cats, watch music videos, eat or have a celebratory drink.

While he does lament on the boredom of running the same loop for hours on end, Yimâ€™s pretty thankful for some of the perks – such as the ability to â€œcontrol the weatherâ€ with air conditioning and fans. Another upside is the â€œability to run virtually nakedâ€ as he cheekily puts.

Finally after 36 hours of counting loops interspersed with cats, Yim chose to end his run at the 263 km mark as it roughly translates to â€œlive eternallyâ€ in Cantonese.

If youâ€™re wondering why someone would embark on an insane indoor marathon, itâ€™s not because Yimâ€™s losing his mind in isolation but for charity!

Heâ€™s joined by a bevvy of indoor runners for a charity event where a face mask will be donated by Ysandalmsia for every 10 km to Lahad Datu Hospital, Kuching General Hospital and Chik Hsin Thong Old Folks Home in Klang.

For those keen to emulate his literal footsteps, Yim offers some tips on running indoors.

Running on the spot isn’t RUNNING. Your range of motion is restricted to the up and down of your legs. Going against the nature of propulsion from the feet/legs. As a warm up for a few moments, that’s peachy but not for hours and hours.If you’re not extra careful, you might invite unnecessary injury over the extended period.

There you go, folks. Proof that completing your much needed work out and staying fit at home is very much possible. Good luck and stay safe, everyone!