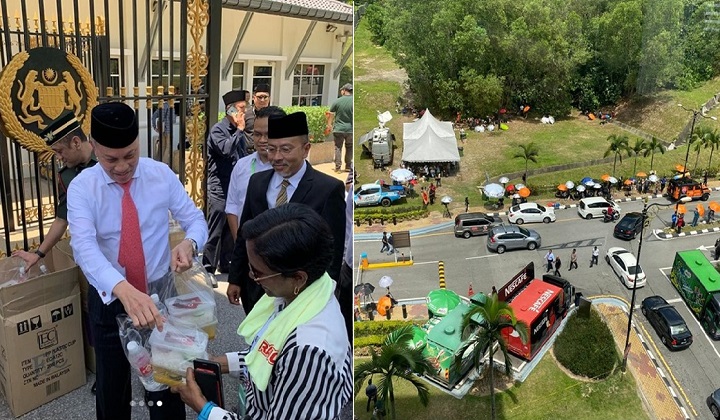 As Malaysiaâ€™s political crisis continues to unfold (live updates HERE), the unsung heroes of this tumultuous period are the journalists and photographers camped outside Istana Negara.

Media personnel have been stationed outside the palace gates since the saga began on 23rd February, updating Malaysians as they patiently await developments under the scorching sun with temperatures averaging 35Â°C.

While it may be par for the course in the profession, their efforts have not gone unnoticed as the palace officials treated reporters and photographers to Kentucky Fried Chicken (KFC) on 24th February. The Yang di-Pertuan Agong Al-Sultan Abdullah Ri’ayatuddin Al-Mustafa Billah Shah himself then showed up with McDonalds meals on the next day to feed the tired journalists.

From Politics to Pesta

This one simple gesture basically opened the floodgates (so to speak) and a mini pesta appeared at the gates of Istana Negara on 26th February.

Booths began popping up en masse on the fourth day of Malaysiaâ€™s political nightmare to serve media personnel who were there to cover the YDPAâ€™s interview of MPs to decide who commands majority as prime minister.

A TRP reader, whose office is right next to the gates, revealed to us that the place has essentially turned into a food fair.

Images of power banks distributed to journalists have also garnered the attention of social media. As one TRP team member puts it, â€œtaking care of journalists in these hard times and even harder hours.â€

Of course, all the merriment did not go unnoticed and Malaysians were quick to jump in on the fun online while also sharing messages of support and gratitude for the media personnel.

In the end, no matter how bad the drama that surrounds us, for Malaysians, food and free stuff is still No1!

Stay tuned to TRP for the latest updates and TLDR of the current political confusion HERE.