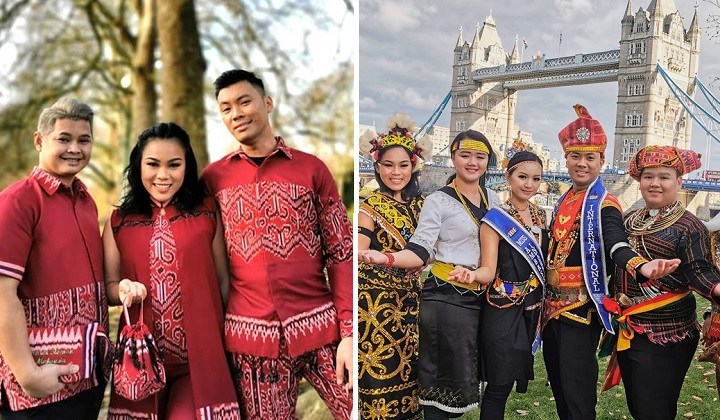 A Sabahan fashion designer has just made a case of how we should pay closer attention to the indigenous designs of Borneo when he won 2nd place in a clothing design competition in London on 30th November.

According to The Star, 31-year-old Shariff Amang, from Beluran, Sabah won over judges at the International Borneo Festival design competition with his ready-to-wear clothing inspired by the intricate pua kumbu ceremonial cloth of Sarawakâ€™s Iban people.

The International Borneo Festival (IBF) is an annual event, focused in KL and London, to promote Sabah and Sarawak cultures internationally.

Hearing of the opportunity to showcase his talent alongside the unique colours of Sabah and Sarawak, Shariff, also known as Hardi Roman, submitted his pua kumbu-inspired-designs and won the Sabah edition of the competition.

A product of skilled Ibanese weavers, the pua kumbu is renowned for its beauty and the immense work that goes into it.

Made using the ikat (tie) and dye method – which is the oldest traditional way of making textiles – the process of creating a pua kumbu blanket requires great knowledge and patience. It takes months of dedicated work and the process includes a special numerical classification and counting technique of the threads that are known only to experienced weavers.

As a testament to the great prowess of the Ibanese pua kumbu weavers, the process is known as ‘kayau indu’, which means the womenâ€™s war. The weavers also had protective tattoos believed to repel evil spirits.

These skills are often passed down from mother to daughter and the pua kumbu itself is inherited from ancestors, with spirits, good or bad, incorporated in the designs.

In the modern era, the pua kumbu designs are slowly but surely gaining international fame. The creation of Borneo Fashion Week, as well as the growing presence of Bornean designers at Malaysian Fashion Week, have carved out a special niche for these ethnic designs.

On his Facebook page, Hardi Roman reveals how he wants the world to recognise the stunning geometry and versatility of Bornean designs.

â€œMy designs are my voice in fashion to bring the beautiful colours of Borneo to the international stage.
With one look, anyone in the world will say â€œYes, I know this design is an original from Borneo.â€