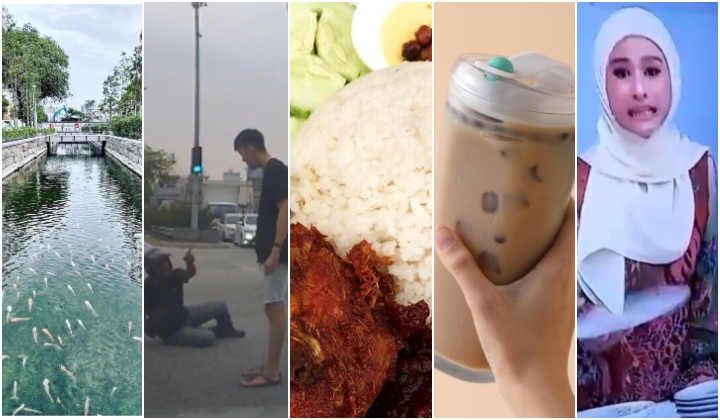 Can you believe that this new and improved TRP has actually only been around for less than a year?

Yet, in the few months that weâ€™ve been around, weâ€™ve covered some insane viral stories that you guys shared like crazy.

So, to celebrate the end of a year, and all our readers, we thought weâ€™d look back on the top 15 headlines that you guys shared the most!

The results of this study by a European marketing technology company triggered Malaysian influencers and Malaysians teased them further by widely sharing the information.

After a Malaysian-based research firm found that the global climate crisis would result in 9 major states ending up below sea level by 2050, Malaysians freaked out.

Following the viral news about a Mercedes tailgating a vehicle at a toll booth, we found out if such an action was truly illegal or not and how to file a complaint if we ever become a victim of such inconsiderate actions.

12. Motorcyclist Gets Hit By Car On Old Klang Road To Demand Money From Driver [Video]

A viral case where a motorcyclist faked an accident with a car to get compensation resulted in all of us finding out the theory that car drivers are automatically at fault is completely false and really depends on the case.

After an unbelievably beautiful image of a river in Penang went viral, sceptical Malaysian netizens showed their investigating prowess by unearthing the truth behind that â€œriverâ€.

When Foodpanda riders protested against their employer over a new payment scheme, Malaysians, unsurprisingly, stood in solidarity with their food delivery people.

And they started harassing a random Twitter user because they thought he was the Foodpanda Managing Director.

9. Bloomberg Says Mâ€™sia Partly Responsible For 63.6% Of Ocean Trash, Gets Slammed By The Internet

After Malaysia sent back tonnes of illegal trash to the US, UK, Australia and Canada, Bloomberg published an article naming Malaysia as one of the top contributors to ocean trash.

The article did not sit well with the internet who called Bloomberg out for its one-sided piece.

Local phone salesman, Joe Gadget shared screenshots of funny conversations heâ€™s had with customers that had the internet laughing so bad our stomachs hurt.

Malaysians were shocked to find out that a nice old aunty selling nasi lemak at a stall in Ampang made way more money than they did at their office jobs.

6. Why Klang Valley Got So Cold All Of The Sudden

Malaysians were super surprised to find out that besides dengue season, flood season, durian season, and festive seasons, we also technically have a â€œcold seasonâ€ as well.

5. â€œDonâ€™t Speak In Chinese When Other Mâ€™sians Are Aroundâ€

A young, ethnically-Chinese lawyer caught the attention of Twitterjaya after tweeting that he personally hated it when people speak Chinese in front of people who may not understand.

4. Mâ€™sian Man Reveals How He Got Away With Overstaying In Australia By Claiming To Be A Refugee

At a time when many Malaysians were talking about how hard it was to travel to Australia, one Malaysian man explained how there were many unscrupulous Malaysians (including himself) who took advantage of Australiaâ€™s human-rights friendly policies to stay there indefinitely *gasps*.

3. Straw-less Boba Cup Designed! The Pearls FLOAT ABOVE THE ICE

While everyone was complaining about how the boba milk tea trend was resulting in a huge amount of plastic waste, two Taiwanese designers came up with an eco-friendly recycled-glass straw-less boba cup and left Malaysians everywhere IMPRESSED!

Malaysians teamed up in an online roast when a Russian YouTuber complained about how he could always only understand half of our tweets because of our multilingual capabilities.

Well, thereâ€™s nothing the online world loves more than a Live TV FAIL. Especially when it was done on none other than on Malaysiaâ€™s media giant Astro.

Man, 2019 was wild! We can’t wait to see what else triggers Malaysians next year!