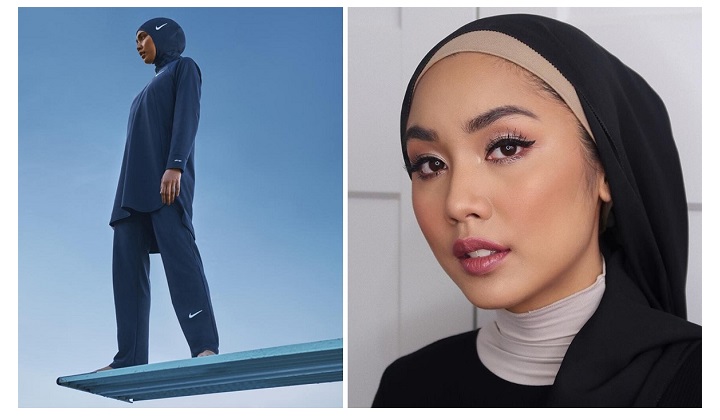 History was made this December when Nike revealed its first
ever modest swimwear line.

Itâ€™s good news for hijabis all around the world, but we
have an extra special reason to celebrate because a Malaysian model is the
face of Nikeâ€™s first modest swimwear global campaign!

The campaign, which went live on 10th December
features Malaysian model Arinna Erin Wira who is currently based in the UK.

As a global model for the new Nike Victory Swim Collection, Arinnaâ€™s face will be plastered across the world as the sportswear giant markets the new collection which includes a full coverage swimsuit, swim hijab, tunic top and swim leggings.

The inclusion of a new modest sportswear collection is monumental for the progression of female athletes, especially those whoâ€™ve been sidelined for their attire in competitions.

According to Elle Poland, the Nike campaign features 4 Muslim women around the globe, including a figure skater from UAE, Saudi Arabiaâ€™s first female technical diver and of course, Arinna.

In the Nike Victory Swim collection campaign video, the women talked about their love for swimming while splashing around in the pool decked in the modest swimwear.

â€œMy grandma literally dunked me in the water and that was history.â€

Arinna is no stranger to the camera though, the young lass is a well-known local influencer and model, now signed with a UK modelling agency, BAME Models.

While this campaign definitely puts Arinna on the map, we
can expect greater things from this brainy beauty who just graduated from Brunel
University London with a Masters in Science In Business Intelligence and Social
Media.

Bismillahâ€¦ In 2013, my dad told me I didnâ€™t need to go for my diploma graduation ceremony because Iâ€™d be going for my undergrad and Masters graduation ceremony in the future. I thought he was crazy and was dreaming way too big especially when I literally just finished my diploma, the fact that he was already thinking about Masters was too much for me to comprehend. One thing about me is that I have the biggest self doubt anyone could ever possess. I look down on myself more than anyone else could. My parents are the reason I am who I am today, the constant lectures, repetitive arguments, pressuring me to do things I didnâ€™t want to do only because I had no self confidence, telling me I could do so much more if I just push myself and go beyond my insecurities. Ngl, it took me 6 years to believe them. I thought I knew myself more than they knew what I was capable of doing. I thought I was a failure even without trying. They didnâ€™t see that obviously, they saw something in me that wasnâ€™t even there yet. My dearest sweetest mummy has always been there from my lowest lows to my highest highs. Sheâ€™s the main reason why I became a model, sheâ€™s the person who encouraged me to try new things and just â€˜go for it.â€™ I had the best of both worlds, striving in my studies and experimenting with the creative/ artistic side. I had THE WORST year in London, hated my parents for sending me here to suffer. Stayed in my dorm for an entire year, refused to live life. Was thinking way too much about not spending money so I wonâ€™t be a burden, everything became an issue because I was just miserable. But they knew it would change if I just put the effort to change the direction of my view. Long story short, they were right about everything. Itâ€™s 2019, I am now a degree holder of Master of Science In Business Intelligence and Social Media and I am happy and grateful for the opportunities that have come my way. This is for my parents, I am forever indebted to them. Daddyâ€™s back home in Malaysia but he made sure I knew I made him proud. I love you both so much ♥️

Itâ€™s amazing to see Malaysia getting beautiful representation
on the global stage. Congratulations to Arinna for completing her Masters and the
campaign!

If youâ€™re keen on getting your hands on the Nikeâ€™s modest swimwear collection, it will only be available from February 2020 online and at select retailers.

In the meantime, you can watch Arinna in action for Nike in the campaign video below: