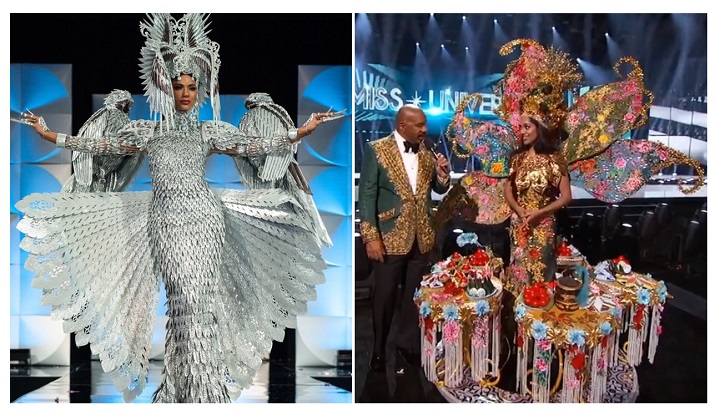 After many, many years of wacky outfits- from nasi lemak dress to the KLCC shoulder pads, Malaysians awoke to some welcome news that Miss Universe Malaysia has finally managed to snag that elusive title. Not the Miss Universe title, but one just as goodâ€¦

Yes, the wildly colourful outfit appropriately named â€˜A Peranakan Indulgenceâ€™ seemingly caught the eye and appetites of the Miss Universe fans with its batik wings and tables of local kuihs surrounding the extravagant get up.

When announcing the Best National Costume Winner at the 68th Miss Universe pageant in Atlanta, Georgia on 8th December, Miss Philippines was announced as the winner BUT it was Miss Malaysia, Shweta Sekhon, who was on the stage next to host Steve Harvey.

As she stood on the stage in costume â€“ kuihs and all – the host Steve Harvey pulled, well, a Steve Harvey, and first announced the Philippines as the best costume winner.

But Shweta wasted no time in correcting the host and jumped in with a, â€œSteve can I say something? Itâ€™s not Philippines, its Malaysia.â€

Steve then explained that he was reading from the teleprompter that said Miss Philippines, but it seemed to have corrected to Miss Malaysia live on TV. But the error was quickly forgiven, and they went on to admire the elaborate costume as Shweta explained the thought process behind the costume.

Miss Universe tweeted (now deleted) out a congratulations to Miss Malaysia and everyone spent a good few hours celebrating in the morning.

Until, we were hit with a surprise plot twist by the Miss Universe organisers…

It seems that there was a mistake and the actual Best National Costume Winner was Miss Philippines all along!

As of 4pm today (9th December), it stands that Miss Philippines is the winner of Best National Costume. While the spectacular piece by Malaysian couturier Carven Ong (whose dresses appeared in the Crazy Rich Asians film) did not win, the outfit and Shwetaâ€™s poise on the stage definitely deserves praise.

Meanwhile, the last time we came close to ending Yasmin
Yusoffâ€™s reign was back in 2017 when Rizman Ruzainiâ€™s Twin Tower National
Costume donned by Kiran Jassal made Top 10.

At the end of the night, the Miss Universe 2019 crown went to Miss South Africa. While we’ve yet to see Miss Universe Malaysia don the coveted crown, we’re still proud of their achievements thus far. Congratulations for the spectacular showmanship to Shweta Sekhon and Carven Ong!

You can read more about Miss Universe Malaysia’s National Costume and its kuihs HERE.

Watch the footage of Shwetaâ€™s moment on the Miss Universe stage below:

Philippines or Malaysia? Is it a joke or another blunder again.