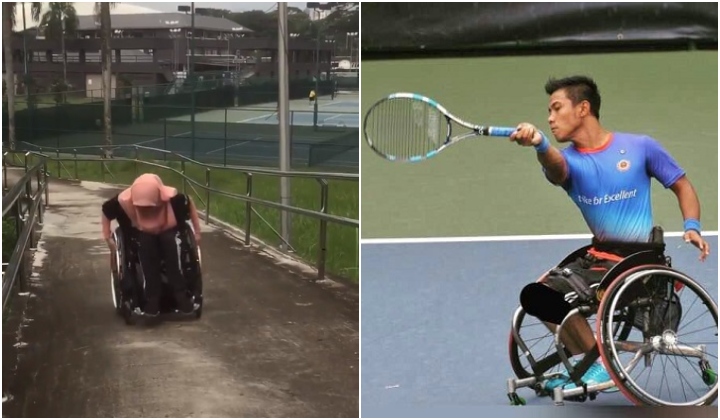 Malaysian Paralympic athletes are a particularly inspiring
group of people.

Despite their physical differences and societal prejudices, theyâ€™ve succeeded in excelling beyond expectations, earning medals at the Paralympic Games to show us that a disability doesnâ€™t have to be a disability.

While we may cheer them for their triumphs, weâ€™ll never know
their exact experience â€“ which is what a Malaysian Paralympic athleteâ€™s wife wanted
to find out.

On his Twitter account, para athlete tennis player Muhamad Firdaus Ibrahim shared a sweet video of his wife, Siti Fatimah Mohd Nor, struggling to climb uphill in his wheelchair during a Paralympic training session at the Duta International Tennis Academy in Kuala Lumpur.

In the caption, he explained:

â€œTook my wife along for training today. I told her I go up this hill every day. Then she said she wanted to try going up (in a wheelchair).
There you go.â€

In the 30 second video, Siti Fatimah can be seen huffing and
puffing while exclaiming in awe on the arm strength required to climb up a
slope in a wheelchair. To which Firdaus replied â€œYou wanted to try, you think
itâ€™s easy to use a wheelchair?â€ while laughing.

Following the adorableness of Siti Fatimahâ€™s earnestness,
the video received over 7,000 likes and flooded with messages of support and
admiration for the couple.

Ur wife earned my respect!

This isnâ€™t the first time the couple captured the hearts of
Malaysians online though.

Back in September, their love story went viral when Firdaus shared how it bloomed from a direct message on Instagram to the pelamin (wedding dais).

This is how my wife flirt me.

From this To this pic.twitter.com/4yRJDO050n

As one of Malaysia’s seasoned para athletes, Firdaus has competed in Japan, Sri Lanka, Taiwan and even won the Bronze medal for menâ€™s doubles at the 2017 ASEAN Para Games.

He is currently in Thailand, competing in the Pattaya Open 2019 which will end on 8th November.

Watch the adorable video of Siti Fatimah struggling to ride her husband’s wheelchair below:

“Spender” Danger: How A Pair Of Panties Almost Cost A Marriage