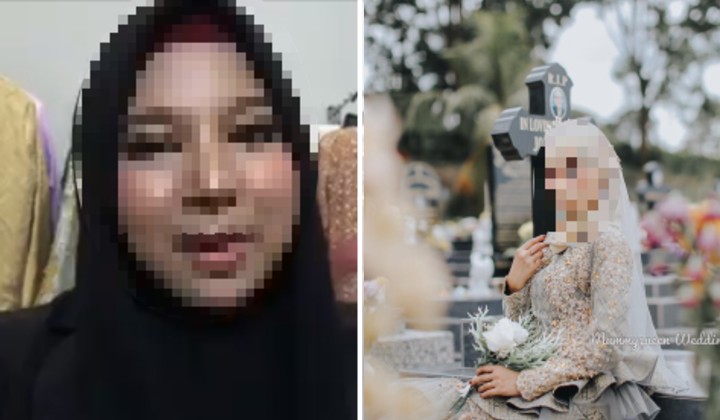 They say that a picture is worth a thousand words.

The owner of the local bridal boutique that originally posted images of brides taken at a cemetery admitted to her mistake and takes sole responsibility for the widely shared and negatively received photographs.

In an emotional public apology video made through her personal Facebook account, 26-year-old Nur Amirah Mohd Amiruddin asks Malaysians to direct any criticism on the images to her directly and not to anyone else involved in the photoshoot.

The apology is currently making rounds on social media.

Recently some rather peculiar pictures risen from the depths of the internet and became quite a “deadly” viral issue.

The images were of a supposed bride clad in a Malay wedding dress photographed in a Christian cemetery.

The bizarre themed photoshoot quickly became a heated topic, with social media users pointing out how inappropriate the images were.

Most shared the opinion that the images had disregarded certain religious and racial sensitivities and were disrespectful to the dead and their family.

â€œF**k**g stupid. Is there no place else for a photoshoot? No respect to a graveyard, let alone a Christian cemetery. Damn, people will surely do anything just for the sake of attention. If you sit on my familyâ€™s grave, I will find you right away girl.â€

No respect for the dead. Very rude of her to do photoshoot at a sacred place. And certainly, no respect for other people’s family’s grave. That is the problem with people who are uneducated.

â€œIf a non-Muslim did this at a Muslim cemetery, people would be angry about it for weeks. We want people to respect us but we donâ€™t respect the sensitivity of other religions.â€

Bride: no. Lets do it at kubur kristian. Baru ala ala Dia De Los Muertos. Mesti likes I banyak kan kan.?

Bride: I want something that no one has ever done before. The city, beach and trees are so boring.

Photographer: How about a Muslim cemetery?

Bride: No. Letâ€™s do it at a Christian cemetery. Then itâ€™ll feel like DÃ­a de Muertos (Day of the Dead). Will get lots of likes for sure.â€

Curiously enough, the collection of images were not from an actual wedding photoshoot, and the woman in the photographed was not a real bride, but a model.

After receiving a wave of negative feedback from netizens, the boutique had taken down the photos and even had its Instagram account set to private.

Nur Amirah had previously apologised to the public for the bizarre set location, which she pointed out, was a Christian cemetery in Batu Pahat, Johor.

She said that the images were not meant to be offensive and explained that the photoshoot was intended to be different and unique after taking some international inspirations.

She also stressed that the images were not posted for any sort of publicity or business gains.

Do you think it’s inappropriate and disrespectful to take pictures and selfies at cemeteries and graveyards?