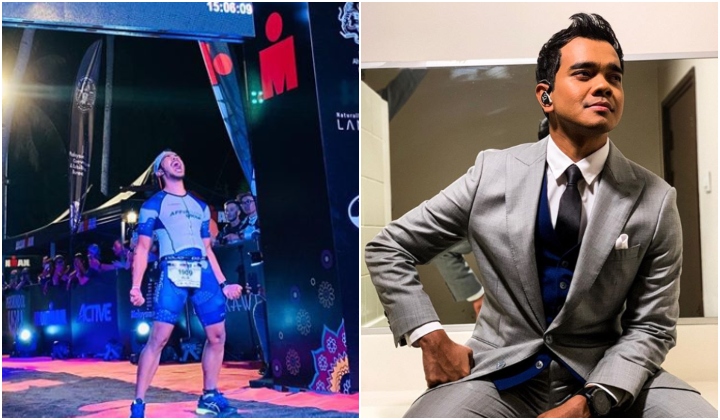 Malaysians are raving about the 29-year-old again after he made headlines in August for backing up his co-host Sherry Alhadad after she was body-shamed on the Malaysian singing competition TV show “Big Stage”.

This time, Alif Satar is being praised for completing the Ironman Triathlon.

Yes, it seems that besides being an amazing entertainer, Alif is also extremely physically active.

Organised by the World Triathlon Corporation, the Ironman Triathlon is one of a series of long-distance races consisting of a 3.8km swim, 180km bicycle ride and 42km marathon.

what an amazing feeling.. canâ€™t wait to share my story to you guys soon. Terima kasih semua yang datang support.. bagi semangat sepanjang Pantai Cenang. iâ€™m sorry kalau your sorakan tak terbalas.. was in a really bad shape mentally. Alhamdulillah made it through.. probably the craziest thing iâ€™ve ever done. 3.8km swim…180km cycling.. and a 42km run.. all in 15 hours 5 minutes and 49 seconds. p/s Tony Stark is not Ironman… i am😎 #IronmanLangkawi2019

Sharing his experience on Instagram, Alif described the race as the most â€œinsaneâ€ thing heâ€™s ever done, admitting that during the difficult race, he was not in the best mental state.

Despite the struggle, Alif managed to complete the race in 15 hours, five minutes and 49 seconds, ultimately winning the title of Ironman.

Malaysians, especially those on social media, recognised and commended Alif for his efforts.

“Take care of your health, exercise. Remember God, don’t forget your daily prayers. You will become like him, with a happy family. I salute you, Alif Satar.”

“He sings well. Is a good actor. An entertaining TV host. Can swim, cycle, AND run a marathon in one day. No controversy. No bullsh*t. Now, this is a real public figure.”

“What can’t Alif Satar do?”

Very true. He should be made an Icon.

He competed in the half triathlon which was also held at Pantai Ceneng, Langkawi and finished the 1.9km swim, 90km bicycle ride and 21km marathon in 7 hours.