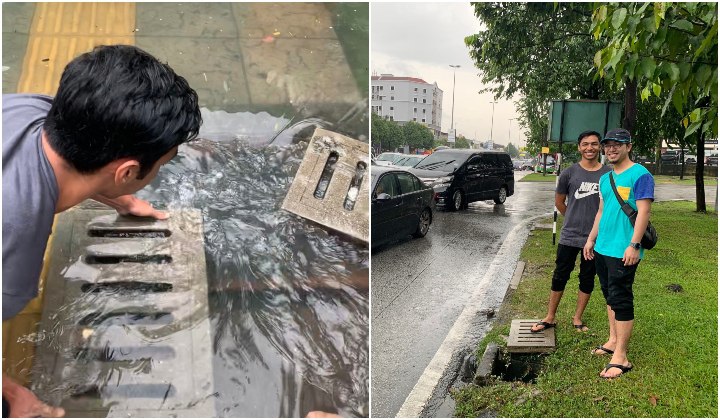 With the recent change in monsoon season, several states across the nation have been experiencing flash floods.

In the Klang Valley, this has become an almost daily occurrence, with the evening thunderstorms and floods making rush hour traffic pretty much intolerable.

However, over the weekend, it seems that two Malaysians decided to take matters into their own hands and eased the flood AND traffic congestion on Jalan Genting Klang.

The story was told by Twitter user @datininaz who shared how her husband and brother used a little bit of common sense to help their fellow motorists.

It takes a little common sense to save the world.

Banjir no moreee! So proud of you guys! Please share & leave a kind message for our unsung heroes 😍 pic.twitter.com/TyfQd1nNeg

According to @datininaz, the three of them were on their way to Kuala Lumpur for work matters. However, during their drive over, the rain started to pour down really heavily. They then decided to make a u-turn and use Jalan Genting Klang to get back home to Wangsa Maju instead.

Along their route, rainwater started to flood the road and they got stuck in traffic. It was apparently so bad that even a bus got stuck.

They decided to take an exit nearby and park their car along the row of shophouses next to the main road.

That was when they noticed a storm drain nearby which was blocked by its cover.Since the water looked clean and clear, her husband and brother started to wonder if removing the storm drain cover might help ease the floodwater on the road.

Considering there were several cars in front of them which had stalled due to the rising level of water, they figured they would try to find a solution for everyone.

First, they removed the cover of one storm drain. Immediately the surrounding water started rushing into the drain.

@datininazâ€™s husband and brother then decided to uncover all the storm drains along the span of the 100m road they were on.

Meanwhile, @datininaz stood by the uncovered drains to warn motorcyclists and people from accidentally falling into the holes.

Within minutes, the entire road was drained of water and the traffic went back to normal!

And donâ€™t worry, as soon as all the water had been removed, @datininaz and her team covered the drains again.

According to @datininaz, several motorists rolled down their windows to thank her and her team for their kind gesture.

Your man deserve medal for this 🎖

All local councils should learn from this. No need to spend millions solving simple flood issues… @chedetofficial

Its not just common sense, its 6th sense during such troubles.
Kudos to these savior. Some might seen it as small matter but truth is it made a huge impact.
Again, KUDOS.. 🤗

@KhalidSamad please take note and include this during your team brainstorming session “mengkaji” for flood solutions. Doesn’t involved rocket science.

Kudos to @datininaz, her husband and brother! The world needs more people like you guys!