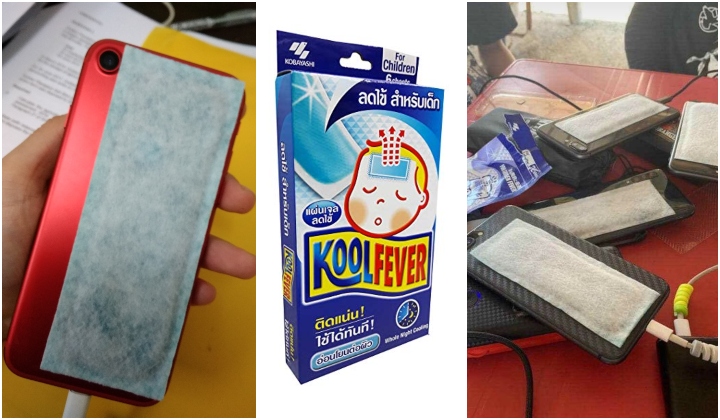 Itâ€™s natural for your smartphone to become a little warm during use, especially if itâ€™s being used for long periods of time.

However, when it overheats, it could potentially become damaged or dangerous. A few months ago, we covered a story about how someoneâ€™s smartphone exploded after it started overheating.

Burn It Down IWill Burn This Place GIF from Burnitdown GIFs

Your phone when you play games for too long.

Common reasons smartphones overheat is overuse, especially when graphic-intensive games and apps are constantly running on the device.

Other causes include using the wrong case for your phone, remaining connected to a Bluetooth speaker for too long, your screen brightness being too high, malware, and video recording, especially when youâ€™re doing all these things outdoors in the scorching Malaysian weather.

But it looks like Malaysians have found a quick and easy way to bring their smartphone temperature back down – KoolFever.

Yep, those patches our mums put on our foreheads when weâ€™re running a fever can also apparently be used to cool down your phone.

Twitter user @roseafni posted the tip on social media assuring her followers that it really works.

And judging by the replies, it looks like this is pretty common knowledge, especially among Malaysian phone gamers.

“Actually this is right. When I play COD, my phone overheats and then I put KoolFever on it”

“Tips when playing games on a hot iPhone, cut some KoolFever and stick it on the back”

Other social media users shared their own temperature managing tips in the replies.

“This is true. It’s the same when you travel to cold countries. When I was in Korea, my Huawei kept shutting down every time I had it out supposedly due to lack of a charged battery even though I had charged it fully. So I put it in my bag with a heat pad stuck to it to warm it up.”

“But don’t do this when you’re charging your phone and the power is between 10% – 80%. During this time your phone naturally heats up because it’s in the process of charging the battery. If it’s cold then it will take longer for your phone to charge. Once it reaches 80% it will start to cool down on it’s own.”

“I put wet tissue in the fridge and once the tissue is cold I put it behind my phone inside its case. It works on dropped framed and hot phones.”

Some also shared that they just pop their smartphone in the freezer or fridge to cool it back down quickly.

“This tip costs money, it would be cheaper to just pop it in the fridge”

“I just put mine in the fridge”

BUT YOU SHOULD NEVER DO THIS.

This is because the cold environment inside the fridge and freezer will cause condensation inside your phone which can result in a short circuit and a damaged phone.

If you need to cool your smartphone down and don’t have a KoolFever on hand, here are some other methods you can try instead.