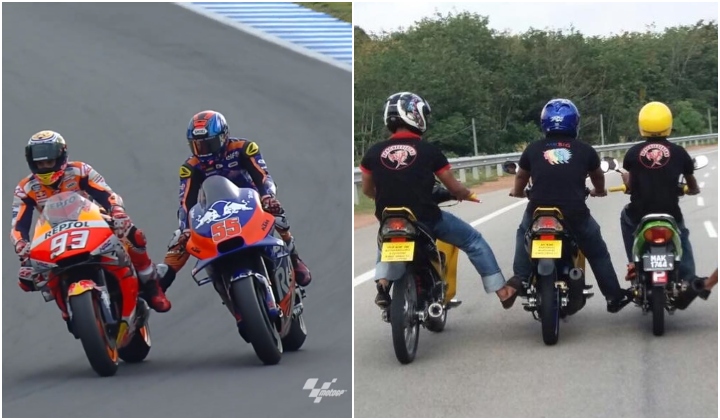 Although Hafizh finished the race at the second last place, the Tech 3 ace stole the show once the race was over when he helped the raceâ€™s champion, Marc Marquez.

According to reports, as Marc celebrated his first-place win, his HondaRC213V which was out of fuel and running on fumes suddenly gave up.

Hafizh swooped in to rescue the Catalan by giving him a push back to the pit – quite literally.

The audience at the race were pleasantly surprised by the method Hafizh used to tow the Honda hero, which is unbeknownst to them, actually a VERY Malaysian way.

The short video of Hafizh pushing Marcâ€™s motorcycle using his foot was posted on MotoGPâ€™s official Instagram page and it quickly went viral with over one million views at the time of writing.

Hafizhâ€™s unexpected towing method was well-received online, especially since Marc himself commented on the video thanking Hafizh for his help.

Meanwhile, Malaysian social media users informed Marc that Hafizhâ€™s method is a classic Malaysian way of helping other riders on the road.