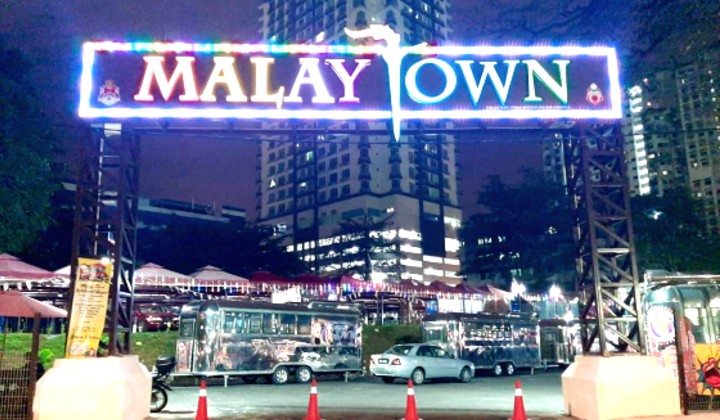 Making your way through KL city most are more than accustomed to TripAdvisor-esque locations that are bustling with life, affordable shopping attractions and wonderfully good eateries like;

We even have our very own Arab Street in Bukit Bintang! (Kidding…)

But what about a place that showcases the racial majority of Malaysia, the Malays?

Most of us would assume that the go-to place would be Kampung Baru, but considering what our leaders have planned for the tiny Malay village in the heart of KL, letâ€™s just say that things might not be the same in the futureâ€¦ (Huhu…)

Malay Town was specifically created as THE spot for Malay and Bumiputera entrepreneurs, businesses and traders to showcase their products and services.

Itâ€™s also apparently becoming a great place for everyone regardless of nationality, race or beliefs to shop, eat or just lepak and have a chill good time.

â€œFor your information, there is now a new spot in KL using the Uptown concept with the name Malay Town. This uptown area is exclusively open for Malay and Bumiputera businesses. We will make it as good as China Town and Indian Town in Malaysia. The area is located at Jalan Perkeliling KL near the Perkeliling bus station in front of the Titiwangsa LRT station. Come one, come all and support our race, especially the Muslims who are trading here so they’ll be as competitive as other locationsâ€¦â€

But there are those who feel that the name, Malay Town, was rather ‘inappropriate’.

â€œThroughout my travels to other countries, town names based on ethnicities are for immigrants or minorities. The use of the name â€˜Malay Townâ€™ seems to reflect that the Malays are immigrants in their own country (psychologically speaking). Donâ€™t take this too lightly even if itâ€™s â€˜justâ€™ a name.â€

Curiously enough, the founder of Malay Town is a Chinese man by the name of Datoâ€™ Seri Chan!

According to Chan, he started out Malay Town to uplift and support the Malay community.

â€œI find this place very beautiful, which why I was attracted to it. I also have plans to uplift the Malay people and beautify this place for the Malays.â€

â€œSecondly, I found that the Malays didnâ€™t have a â€˜townâ€™. I know thereâ€™s a China-Town, thereâ€™s an Indian-Town, but there was no Malay Town. Thatâ€™s why I tried to get a Malay town for the Malay communityâ€¦â€

said chan in an interview via Lazat Ke Langit

Unfortunately, the fact that Malay Town was created by a non-Malay man didnâ€™t sit too well with some members of the Malay community…

â€œThe Chinese are so smart to take advantage of using the name â€˜Malayâ€™.â€

â€œThe founder is Chinese, not Bumiputera. Sorry, Iâ€™m not supporting this. Hope Malays wonâ€™t open their businesses there. Find other places, there are many others.â€

â€œItâ€™s good that the traders are Malays, but paying rent to the Chinese. Such a pity.â€

Whether it be Malay Town, China-town, Indian-town or Borneo-town (fingers crossed, I want me that authentic Kolo Mee…) you can be sure that Malaysians and tourist alike would surely flock anywhere that gives you a great shopping experience, awesomely wholesome food and a fun-tastic good time!