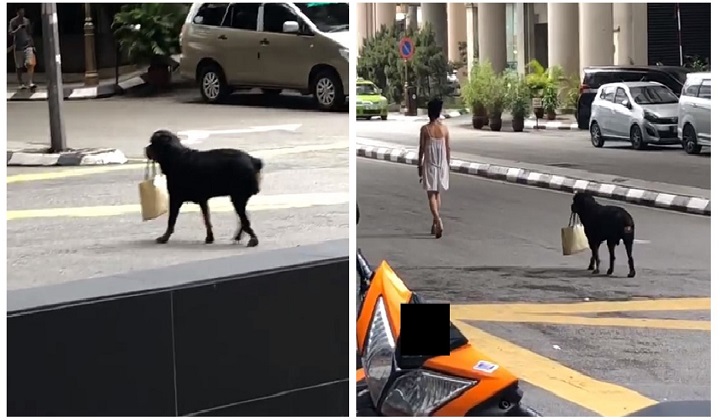 Loyal, adorable and the best friend youâ€™ll ever have. Thatâ€™s just some of the reasons why we love doggos.

Today, we find another reason when a video of a “dangerous” dog carrying its ownerâ€™s handbag on a walk at Bukit Bintang made an appearance online.

Posted by Facebook user Nahur Bhai, the video shows a black Rottweiler dutifully carrying its ownersâ€™ handbag while walking behind her.

The 24-second clip of the adorable scene is believed to have
been recorded in Bukit Bintang.

In the video, the doggo is seen trotting down some stairs
and onto the road with a beige handbag in its mouth while a woman walks in front
of it.

With such an unusual sight for Malaysia, the clip captioned
with â€œAda berani ragut kaaa???â€ (Anyone brave enough to snatch?) has gone
viral since it was shared on Tuesday (8th October).

Many Malaysians were tickled by the scene, heaping praises
for the good boy.

However, criticisms were launched at the owner as well as
the dog could be seen walking with a slight limp.

It’s actually not unusual to spot a Rottweiler with a limp. Hip dysplasia is a common hereditary health issue in Rotties due to pure breeding.

While Rottweilers are considered an “aggressive” breed with restricted ownership in Malaysia (find out how to get a Rottie license HERE), it’s actually a pretty chill dog.

According to the American Kennel Club (AKC), Rottweilers are territorial but also calm, confident and responds quietly with a wait-and-see attitude to influences in its environment.

Fun fact: Rotties were amongst the first guide dogs for the blind.

Nonetheless, the emergence of this video serves as a timely reminder after the viral dog catching video that these creatures are not all dangerous and can be the loveliest companions.

You can see the doggo in action at the video below: