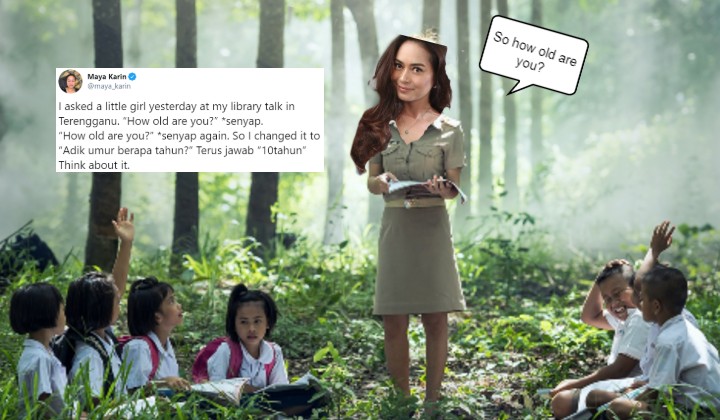 Local actress Maya Karin went trending on social media over the weekend after she posted comments that have Malaysians at a split.

Recently the starlet tweeted about her face-to-face with a 10-year-old girl in Terengganu and publicly called out how the youth lacked proficiency in the English language.

As the story goes, Maya had asked the girl a question in English, but when she did not get an answer the celebrity then asked the same question again in Malay. It was only then that she received a reply.

From that encounter, Maya took it as her prerogative to question the level of English education in the country, even tagging Education Minister Maszlee Malik in her posting.

The tweet quickly gained attention from netizens with many criticizing the actress in questioning the intelligence of rural Malaysia.

whats wrong if a 10 year old couldnt speak english? since when did learning a western language define intelligence?

Shame on you for ridiculling the poor little kid.Before acting like great English teacher,should learn prioritize our own national language first,instead asking others to think about it for you.Stop westernization/arabizing,we should be proud n preserve of our own unique culture.

Remember, not everyone is as lucky as you..if the kid u ask living in environment that use fully english..sure u wont tweet that…

Thereâ€™s a lot of factors why a kid canâ€™t speak or understand English. His/her upbringing, his/her environment, his/her education, his/her family background etc. Please donâ€™t jump to conclusion based on one encounter and put it solely on our education system. Please think b4 tweet

But, a number of Malaysians also sided with Maya in saying that the scene was proof of a deep-seated problem that exists in the countryâ€™s socio-economic and cultural divide, as well as disparities in the nationâ€™s education system.

Malay is our national language no doubt, but English is a necessity. You need to learn both languages one way or another. Itâ€™s a life skill, being bilingual could help you communicate with other people from different backgrounds. Itâ€™s a tool for us to expand our horizons.

â€œThank you @maya_karin for opening everyone’s eyes. One of the reasons why this happens is that many people in Terengganu are narrow-minded. When someone tries to speak English, there would be those who would tease and even scold them. Even until secondary school, their English wouldn’t be okay.â€

As a teacher teaching English, for primary school kids, it’s really common for the kids to not be able to understand or speak in English for daily conversation as their first/second language is Bahasa Melayu. Even if they’re able to understand/ speak pun they’re comfortable in BM

Responding to the criticism, Maya later came out to the media explaining that she had no intentions of insulting anyone, instead wanted to address the language barriers that exist within the community.

She pointed out that in order for the society to succeed and grow, there is a strong need to learn and experience multiple languages, especially English as it is the current global lingua franca.

â€œIf we can all speak multiple languages, we would have more advantages.â€

â€œFor us to develop, English is very important in order to communicate internationally.â€

â€œIt has nothing to do with glorifying the colonial language and it is not biased towards Western languages, the reality is that English is the international language used today.â€

said Maya in an interview with Astro AWANI

Parodies of Mayaâ€™s comment also blew up on social media and became the trending joke of the week.

Here are some of the few hilarious ones we managed to pull out;

I ask a little girl yesterday at a library talk in Terengganu.

So I changed it to “How young are you?”.

I met a patient yesterday.

I asked a 10 year old girl yesterday at my library talk in Kelantan.

Then out of nowhere, a 53 year old man yelled at me.

All it takes is one bad day…

So I changed it to â€œAdik umur berapa tahun?â€ Terus jawab â€œI used to think that my life was a tragedy. But now i realize, its a comedy.â€ Sambil tersenyum.

It’s rude to ask a lady about her age.

A little girl asked me yesterday at my library talk in Terengganu.

I tak layan. Never ask a lady her age you little brat. Think about it.

I asked a little girl yesterday.

Terus dijawabnya â€œSir, what are you doing in my home, if you don’t leave now I’ll call the policeâ€

I asked a little girl yesterday at my library talk in Terengganu.

So I changed it to:

So Malaysia, where do you stand?

Is the current level of English literacy in Malaysia inadequate? Or do we need to highlight the importance of the national language even more?