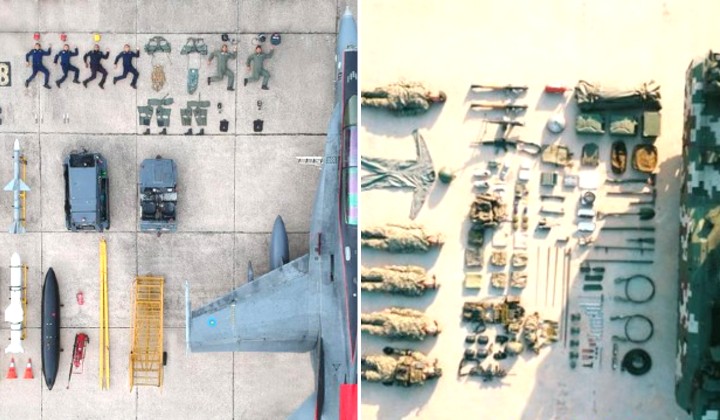 Emergency responders and personnel from around the world are fronting in a very big way!

Taking part in what’s now being called the #TetrisChallange, this latest craze is basically an upscaled version to the usual knowling a.k.a. flat lay images often seen on social media.

This involves taking a birds-eye view picture of a collection of items that have been organized and laid flat on a surface.

The viral trend apparently started when members of the when Zurich police force in Switzerland posted an image online featuring 2 officers lying together with the contents of their patrol car.

The fad quickly caught on with workers from multiple fields and specialities across the globe took part in the high-jinks, giving audiences a quick and creative glimpse into the everyday life in their careers.

Well, Malaysia wasn’t about to be left out of the party!

The boys from the Royal Malaysian Air Force (RMAF) showed up with an F18 jet fighter along with a set of bombs, missiles and other equipment.

“Poise!!! Want to see what we could do? Join the Royal Malaysian Air Force – World Class Air Force”

The image posted on Thursday (September 26) was partly to promote Karnival Hari ATM (Military Day Carnival) which was held over the weekend at the Royal Malaysian Naval Base in Lumut, Perak.

Then came the dudes from the Royal Malay Regiment (RAMD) showing off their tank, bazookas and machine guns with an image posted by Twitter user asfahzh.

It’s nice to see that the brave warriors tasked with our safety and security also have a good sense of creativity and humour in em’.

Keep up the good work ladies and gents!

Here’s are some other awesome #TetrisChallenge images from the rest of the world!