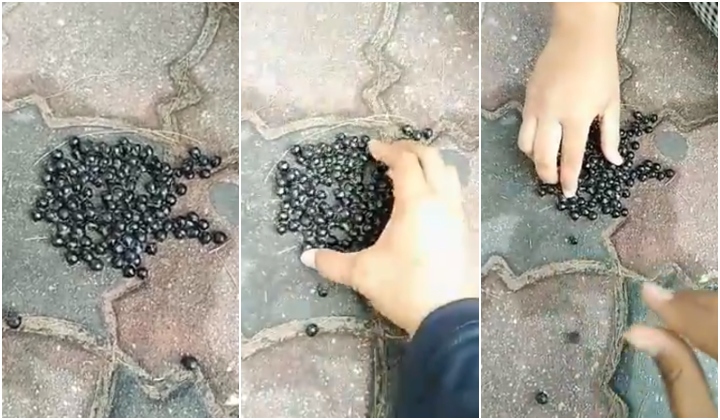 As it is, millennials are getting really tired of their parents sharing spam hoax messages on WhatsApp.

Additionally, we know how damaging these fake messages can be, as Starbucks gets accused of being non-halal on pretty much a yearly basis due to the same.

So, you can imagine the frustrations Malaysian millennials felt when they received a hoax message concerning their boba tea.

Especially when the message came from one of their very own and resulted in their parents forbidding them from consuming this sugary treat.

The hoax message this time comes from a video which has been making its rounds on the internet recently.

In the video, two young women warn their viewers about the dangers of boba.

They explain how they had LITTERED their boba tea on the ground outside the previous day to let CATS DRINK SOME OF THE TEA.

They continue to say that they were alarmed to find the boba pearls still outside where they had left them the following day.

The two young women then show how hard the boba pearls had become (they basically hardened and stuck to the ground like glue).

And they proceed to warn the public about the dangers of boba pearls and the possible effects the pearls could have on our bodies.

Social media users were appalled by the video on so many levels.

I got this from whatsapp.
Nak tanya satu soalan.

â€œI got this from WhatsApp. Iâ€™d just like to ask. Are you stupid?â€

Firstly: The fact that the two women had just admitted to littering

“Poor girls. Without realising it, they have made a fool of themselves. And they made a mess on top of that”

“They tried to prove a point, but all they proved was their lack of civic-mindedness”

Secondly: the fact that they tried to feed cats boba pearl tea

“They tried to give boba tea to cats. hmm stupid stupid.”

“Cats don’t eat boba or are they now also following the trend?”

Thirdly: Their obvious lack of critical thinking abilities from their complete misinterpretation of facts surrounding the reason the boba pearls had hardened.

How Confused GIF from How GIFs

“This is what happens when your mother tells you to go to school but all you do it sit at the boba tea shop. Now you’re dumb. Don’t you know that even rice hardens when it’s dry?”

“Of course the boba will harden when it’s been drying under the sun. Just like sun-dried fish. Boba is made from tapioca starch”

“How can they compare leaving the boba to dry outside with the condition inside our stomachs? Our stomach has acid, whatever goes inside will be digested. It will even dissolve a swallowed piece of 1.0mm metal. But please don’t try that, are you stupid.”

Fourthly: The fact that yet again, their parents had fallen victim to believing such nonsense.

“Because of these two, now my dad won’t let me drink boba tea anymore. Show me your face kids.”

“My mother shared this video on WhatsApp and when I advised her she told me to stop being smart.”

In case you were confused as to why the boba pearls hardened, boba pearls are made from tapioca, a starch extracted from cassava root.

During preparation, the boba pearls are boiled in sugar water making them soft and chewy – the same texture as gummy bears.

Therefore, when left to dry in the sun, one would expect the boba pearls to harden and stick together.

We urge our readers to consume boba tea in moderation and remind them to keep their boba pearls in their bellies and not litter them on the floor for cats.