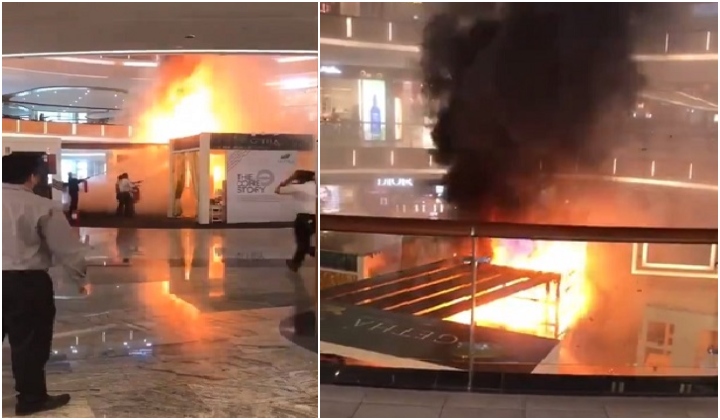 In these hazy conditions, the mall is one of the few places we
can seek respite from the noxious smog.

However, it seemed like the smog made its way indoors when a
HUGE fire broke out at Mid Valley Southkey mall in Johor Bahru yesterday
afternoon (18th September).

Through numerous videos that were shared across social media, it could be seen that the fire broke out at a furniture display and the flames were lashing upwards as high as the 2nd floor.

Clouds of black smoke could also be seen engulfing the area
while the fire alarmâ€™s shrill tone rang out loud.

The scene was clearly one of danger. Unfortunately, these circulating videos all showed one rather depressing thing: people recording the incident instead of running away.

In several of these videos, people were seen walking towards
the fire instead of escaping the threat to safety.

Chilling next to the fire…

Midvalley, johor is on fire pic.twitter.com/tn8BCAG09i

Getting a front-seat view of the action

The proximity of the recorders to the fire did not go unnoticed on the internet.

Translation: “Are Johoreans not afraid to die? Nobody wanted to run”

Translation: “I don’t know why people were so chill. If it was me, I would’ve ran out of the mall a lot sooner.”

Translation: “The person who took the video must have 9 lives. So close to the fire… Luckily there was no explosion. Otherwise, your proof of a fire will be all gone.”

They were lucky, though, as the blaze was successfully put
out by the buildingâ€™s management. The mallâ€™s management also later updated on Facebook
that there were no casualties or injuries.

Meanwhile, the Johor Fire and Rescue Brigade states that source
of the fire remains undetermined, but investigations are underway.

In the event of a fire, Bomba Malaysia advices one to evacuate immediately to a safe open area. If there is thick smoke, you should crawl on the floor to prevent choking.

This incident also harkens back to the time when a Malaysian recorded a preventable highway accident instead of honking the sleeping driver awake. You can read about it HERE.