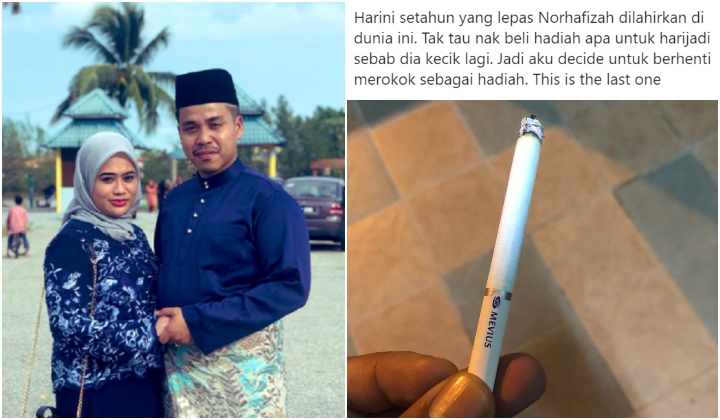 Most parents will tell you that the birth of a child changes a person.

This tiny innocent human being youâ€™ve made with your partner will make you feel both elated and fearful at the same time.

For this Malaysian dad, it made him want to give up a dirty habit heâ€™d been holding on to for a long time.

Mohamed Hafiz shared on Twitter that as his daughter, Norhafizah turned one years old, he wanted to celebrate the joyous occasion with a worthy present.

He decided to quit smoking.

In the tweet, Hafiz explained that he had been thinking of what to get for his daughter’s first birthday, considering sheâ€™s still very small.

Accompanied by a photo of a cigarette, Hafiz shared that he had decided this would be his last stick.

Good For You Clap GIF from Goodforyou GIFs

The tweet, which has since been retweeted more than 16k times at the time of writing, received many supportive responses.

Social media users praised Hafiz for his honourable decision. Some even took the opportunity to share their own experiences with kicking the dirty habit.

Please bro jangan kecewakan Hafizah. Our prayers be with you and your family. Happy birthday si comel 🌻🌻🌻

“Please brother, don’t let Hafizah down. Our prayers be with you and your family. Happy birthday cute one”

Good luck,bro. My dad ambil masa sehari to quit smoking when he realized itâ€™s his fault for making his son dapat asthma. ✊🏽😊

“Good luck brother. My dad took just one day to quit smoking when he realised it’s his fault his son became asthmatic.”

“I used to smoke 14 Dunhills and 20 Winstons without fail. When my eldest turned a year old, I was determined to quit. Now, my kid just finished their UPSR exams. It’s not impossible to live without cigarettes. Now my breath no longer smells.”

“I was like this too. I’ve tried thousands of times to quit. I will pray that you will keep your promise to your daughter.”

Mohamed Hafiz also updated his Twitter followers on how difficult it is to quit smoking.

Recently, he had to make a trip to the clinic after vomiting so many times.

“Update. After vomiting 3 – 4 times, I’ve gone to the clinic. Nicotine addiction really holds on to you after you’ve been surrounded in cigarette smoke for 16 years. In my daze, I accidentally wore two different slippers.”

Although Hafiz has been unsuccessful in his previous attempts to quit, attributing his previous tries to his parents and his wife, heâ€™s determined to try again, this time for his little girl.

We believe you can do this Hafiz! All the best and happy birthday to your little one!