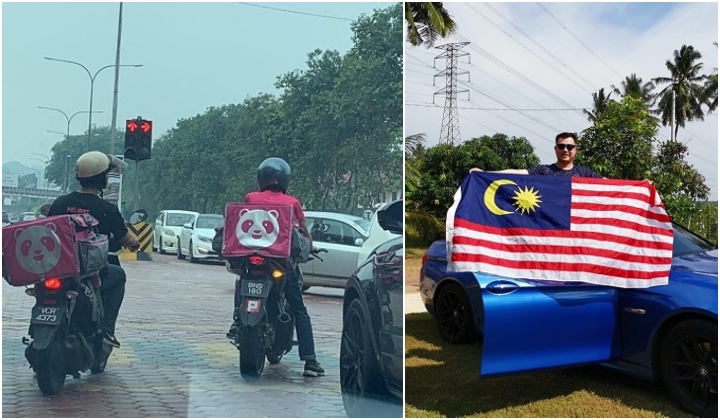 We see them zipping around, weaving in and out of traffic to
earnestly deliver sustenance to us hungry souls.

However, the contributions of food delivery riders can go beyond that as one Subang Jaya man discovered.

Facebook user Dgsw Goh took to the social media platform to share an encounter he had with a food delivery rider on the roads of Bandar Sunway in Subang Jaya.

While driving in heavy rain, a Foodpanda delivery rider suddenly braked in front of him.

There was a long metal pipe in the middle of the road, a clearly
dangerous hazard to vehicles-especially with the pouring rain obscuring vision
and slippery wet road.

The Foodpanda rider then picked it up and tossed it aside where it wouldnâ€™t cause harm.

It might have been an unremarkable moment for the rider, but
this selfless act made an impression on Goh who witnessed the entire thing.

Touched, Goh posted the tale on his Facebook page, and asked the internet to help him find the Foodpanda rider so that he could personally give him a reward for his thoughtful act.

â€œI am so proud of his character.â€
â€œThis humble man wants to meet the selfless rider and offer some little help to ease their burden.â€

Equally touched, Facebook users spread his message with 2.3K
shares at the time of writing.

As it turns out, his efforts worked!

Goh told TRP that he has found the kind rider.

The young man is a student in Perak who comes to KL on
weekends to work as a food delivery rider.

Plans are underway for the two to meet next week and we will be sure to keep you updated!

Goh also told TRP that he chose to share this event to tell everyone that there are still many good people in Malaysia.

He also wanted to show people that incidents like this prove to him that Malaysia is the best place in the world.

Are you inspired by this story? Then share the good word with your friends and family 🙂