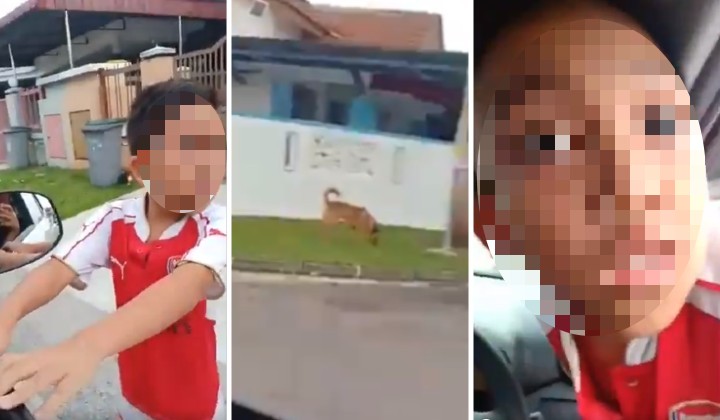 A viral video thatâ€™s making rounds on social media shows just how much fear can literally take you for a ride.

In a 45-second clip shared by Twitter user Istajib Mokhtar, a young boy is seen driven mad with terror when he apparently crossed paths with a stray dog.

The boy had been cycling around the neighbourhood when he had a run-in with the drifter doggo.

Panicking at the sight of the animal, the boy got off his bicycle and ran off to seek the help of an oncoming vehicle that was coincidentally in the area.

The video shows the boy confessing his fear to the driver, who managed to record the boy’s reaction.

In the clip, the kid can be seen trembling in fear, asking the woman for help.

Fully giving in to his fear, the boy then decided to jump for cover, climbing his way through the open driverâ€™s side window of the womanâ€™s car.

After climbing into the car, the kid then crawled his way into the back seat, finally protected from the “vicious monster” that had been terrorizing his day.

Gestured the boy as the woman recording the video went on to tease him, calling out to the dog to come and chase after the boy – via Twitter

The driver can be heard laughing away, shocked and humoured by the boyâ€™s actions.

The video posted on September 3 has since been viewed over 100,000 times, quickly becoming the talk of Twitterjaya.

Netizens came in droves commenting on the boyâ€™s cute and comical behaviour.

“This boy is so cute when he said he was scared. But it’s dangerous to just jump into a stranger’s cars…”

Commenters also shared their own experiences of being scared and chased by dogs.

“I was once chased by a dog when my friend was teaching me how to ride a bike. He ran away leaving me behind, then I fell off the bike and forgot what happened next…”

“Once I got chased by a dog when I went out to buy snacks. Only when I got home that I noticed I was missing a slipper and dropped all the snack I had bought…”

Do you have your own hilariously terrifying experiences with dogs?