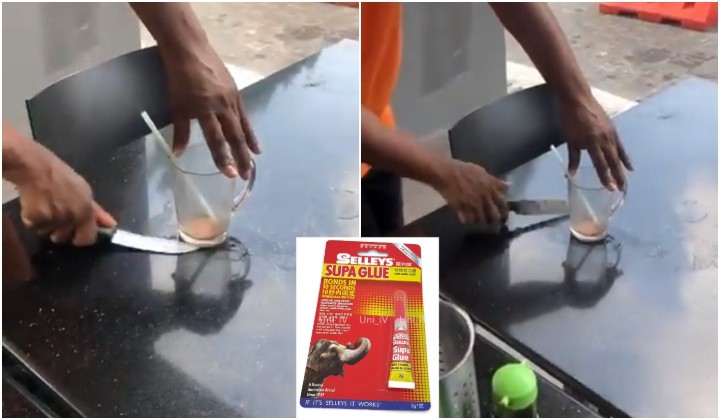 Just when we thought that Malaysian teens have learnt their lesson after the squishing incident at a Nilai Family Mart earlier this year, something new popped up that made us face palm very, very hard.

In todayâ€™s episode of irresponsible teens, we are confronted by their awful action of supergluing a cup to a table at the mamak.

A video has popped on Twitter, shared by user Alec (@tehpeng_), showing a waiter labouring to remove a glass from the table with a knife.

According to Alec, a group of teenagers around secondary
school age were hanging out at the mamak- making noise and catcalling passers-by.

While that was annoying, it was overshadowed by their mean-spirited
actions of gluing a cup to the table with elephant glue.

Disturbed by their awful actions, Alec called for people to put a stop to such behaviour as vandalism is no laughing matter.

Theyâ€™re our next generation, donâ€™t let them â€œnormaliseâ€ this please.â€

He then urged for the adults to help educate kids who behave
badly for the good of society.

With 20.7K retweets at the time of writing, the video hit a nerve for many Malaysians who were simply appalled by the horrid act.

Translation: “Then they’ll make a prank video. The youth nowadays are so weak. They can’t differentiate between bravery and stupidity.”

If dapat tangkap bebudak tu, i would gam kepala depa together. Face to face

Translation: “If the kids are caught, I’ll glue their heads together. Face to face.”

Translation: “Pity the waiter. What’s their problem anyway? I feel like knocking their heads. So infuriating!”

Translation: ” Check the CCTV and make a police report. This case can be categorised as vandalism.”

If the kids are caught, they could be investigated and charged for mischief under Section 427 of the Malaysian Penal Code.