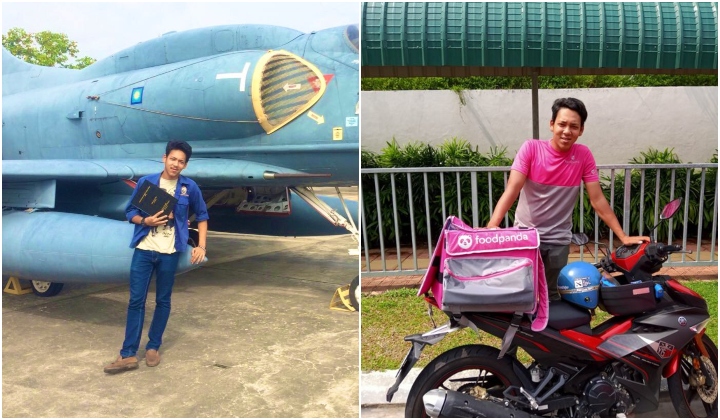 Over the weekend, a young engineering graduate had Malaysian
Twitter chuckling when he tweeted about landing a new job.

User @cukey28 had completed 5 years of studies to obtain his
degree in Aircraft Engineering and now, he calls himself a â€œFood Distribution
Engineerâ€ aka food deliveryman.

With 14.5K retweets and 16.6K likes (at the time of writing), his ability to poke fun at himself garnered much support and well-wishes for the good-natured graduate.

Of course, Malaysians being Malaysians, took the opportunity to share their own equally creative job titles.

You are not alone bro..2 years already into Fluid Distributor Engineer🌽 pic.twitter.com/t2FSJuZpoQ

Bachelors in TESL to Security Guard

Management degree to managing a kindergarten

Despite the hilarity that ensued from @cukey28’s tweet, the replies worried netizens about the sad reality of the job market where Malaysian graduates are underemployed.

We seriously need to fix this structural economic problem. pic.twitter.com/j5jrCo6Acr

According to an MIDF Research reported in The Edge, Malaysia has a high youth employment rate with a record of 10.8% in 2017. The most likely reason for this was skills mismatch.

Aware of the youth employment problem, the Youth & Sports Ministry are working to come up with solutions.

Most notable of which is the recent announcement of Go-Jek’s upcoming arrival in Malaysia which minister Syed Saddiq Syed Abdul Rahman hopes will create “hundreds of thousands of job opportunities” for the “Mat Motos.”

As for the skills mismatch issue, The Star reported back in April 2019 that the Cabinet has agreed to set up a task force to create one million quality job opportunities.

How has the youth employment issue affected you?