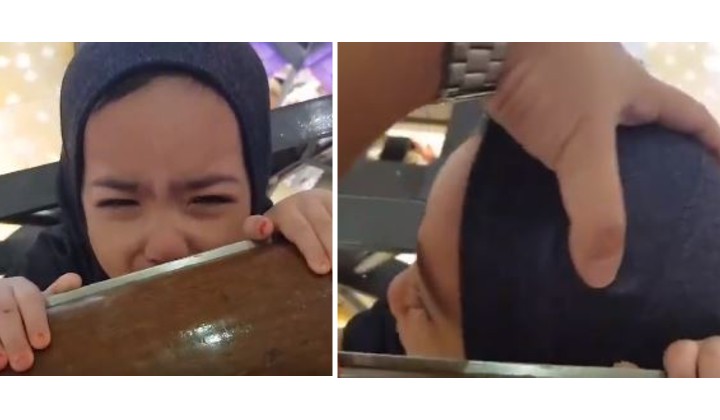 Disclaimer: No children were hurt in this video

What would you do if your kid got stuck in between railings?Panic? Cry? Laugh?

I always see peopleâ€™s childrens’ head getting stuck. When my kidâ€™s head was stuck, it was so hilarious! 😂🤣

In the video, @mhilmiismail is heard saying to his daughter (between laughs):

The 4-year-old Naurah has captured the hearts of the Twitterverse with 341,000 views over the weekend, and nearly 29,000 retweets.

Besides, this is not the first time Naurah has tickled the hearts of netizens.

What kind of hilarity is this?

My wife praying.
My kids playing whilst eating lollipop.

My wife: *yawns*
Naurah: *Stuffs lollipops in her motherâ€™s mouth*

Being the Asian parents we are, Malaysians are just adding salt to the wound.

“Parents just love to say to their kids when they make mistakes, “haaa do some more, wanna do again?” 😂”

“Hahahah if we joke about leaving them, they will cry even louder 😂”

“If it was me, I’ll tease her some more.

I’ll say, need to chop off her head laa, I’ll say need to leave her there laa, or just say the police will come laa. Hahahaha 😂😂😂. “Haaa do some more, do laa”. Reverse psychology.”

Whilst some Netizens were sharing their funny childhood memories.

“Normally, kids who like to do weird things like this are smart. When my sister was small, she took the bicycle lock and chained it around her neck. The key was lost. My late father had to saw the lock off her. Her neck was stuck to the lock for 24 hours. 😂 Thank God now that she’s grown up, she’s very, very smart.”

“I remember when I was small, I was stuck in a wooden chair. 🤣🤣 The most nervous of all was my brother, because he was scared that my mom would wake up…Finally he had to wake my mother up even though he was so scared 😂😂 When I think about it, how did I even end up doing such weird things?“