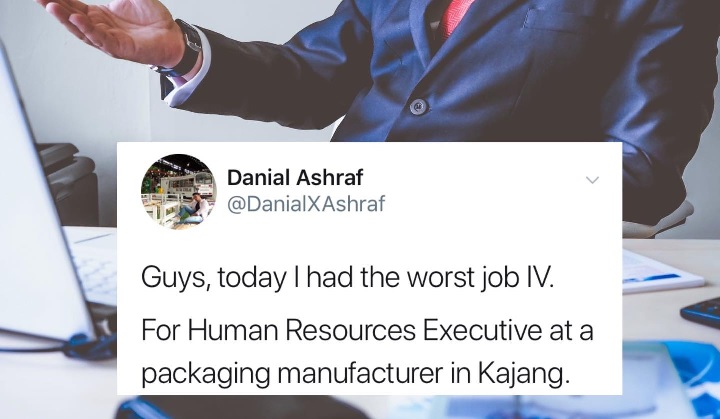 Ah, working life. Almost all of us can relate to the feeling of being freshly shipped out of education, only to arrive at the doorstep of real life unexpectedly.

The fear, the excitement, and the growth of it all has shaped us into the working adults we are today.

However, with that comes horror stories of certain bosses and hellish tasksâ€¦ but this one netizen seems to have had it worse than most of us!

Danial Ashraf, 24, took to Twitter to recount his side of a rather ridiculous interview he faced. The thread went viral after merely hours of being posted.

According to his Twitter thread, Ashraf mentioned how he was interviewed by 2 interviewers; and boy, was this one interviewer an earful!

This particular interviewer kept on giving snide remarks and asking inappropriate questions throughout the interview.

Even though Ashraf kept his cool and progressed with the interview, the turning point of the interview came with the mention of the expected salary.

The interviewer completely disregarded Ashrafâ€™s resume, which clearly stated all of his experience and the reasons why he wanted a salary of RM2,700.

Instead of understanding Ashraf, the interviewer chose to ridicule him, and give him unsolicited advice on how the working world is like.

Itâ€™s clear that the interviewer was set on the idea of â€œworking from the bottomâ€.

But how unreasonable was Ashrafâ€™s claim for a starting salary?

Jobstore stated that according to the Malaysian Employees Federation, a fresh graduateâ€™s starting salary with an Honours degree could actually go up to RM2,600.

On top of that, Malay Mail also noted that Bank Negara Malaysia stated earlier this year that RM2,700 is the minimum to be able to live in the metropolis.

The Malaysian Trade Union also added that RM3,000 should be the starting salary that is fitting for someone in todayâ€™s world.

Comparing that, Ashrafâ€™s demand for a starting salary of RM2,400 is not very unreasonable and could even be considered as below the rate!

And whatâ€™s worse, it turns the position that he applied for in the first place wasn’t even availableâ€”and yet the interviewer kept grilling him anyway!

Talk about testing your patience!

We managed to speak to Ashraf in regards to this tale and he is still applying for other interviews.

However, one thing to note about Ashrafâ€™s tale is to always go into your interview prepared.

When scoffed at for being too ludicrous for his salary demand, Ashraf professionally turned the table by stating the facts he already knew about the current job market. Now thatâ€™s what you call a classy comeback!

So fresh graduates reading this, remember to be thorough when doing your research!

The starting salary question is no joke and if you bargain wrongly, you could potentially find yourself stuck at a job that canâ€™t even cover your bills.

And if you find yourself in a similar position like this with a rude interviewer, remember to keep your cool and exit gracefully. Thereâ€™s nothing like the sweet victory of winning a battle of wits.

How To Do A Good Introduction During A Job Interview?