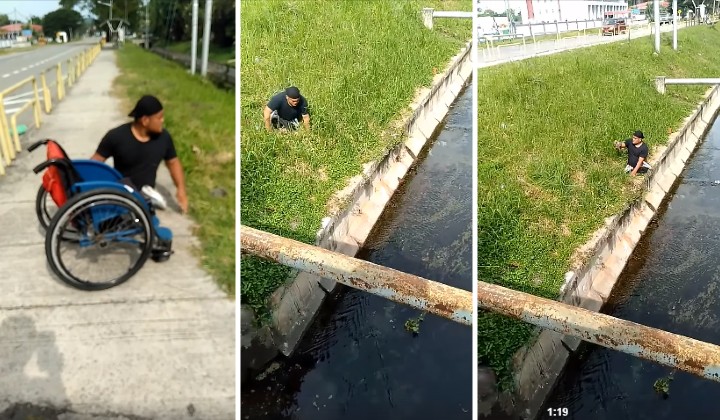 A man bound by a wheelchair showed true valour in a recent viral video where he selflessly rescued a kitten which got itself stuck in a storm drain.

Abu Fathiyyaturahma shared his story on Facebook where he and a friend had encountered the animal in desperate need of assistance as they were making their way to a nearby sports complex.

The two-minute clip showed the differently-abled hero getting off his wheelchair and making his way through a grassy meadow with his bare hands to get to the distressed animal which laid hanging on for dear life against the walls of the drain.

â€œThis morning while we were on our way to the sports complex we came across a kitten that had fallen into a large drain, all drenched and hanging on tightly to the walls.”

“No idea how long it had been there, so I tried to help, and thankfully we managed to get it out.â€

According to Abu, his friend who was recording the video was also differently-abled, donning a prosthetic leg which made it difficult for him to assist in the rescue.

Going at it alone, Abu managed to get a hold of the troubled kitty and rescued it from the conundrum it was in.

The cat then quickly scurried away from the scene as its rescuer placed it on firm ground.

Naturally, netizens were deeply impressed by Abuâ€™s chivalrous actions, showering him with praises and respect.

“(A disability) is not a hindrance…”

We tip our hats to Abu and his friend, proving to everyone that nothing can get in the way of a true hero!