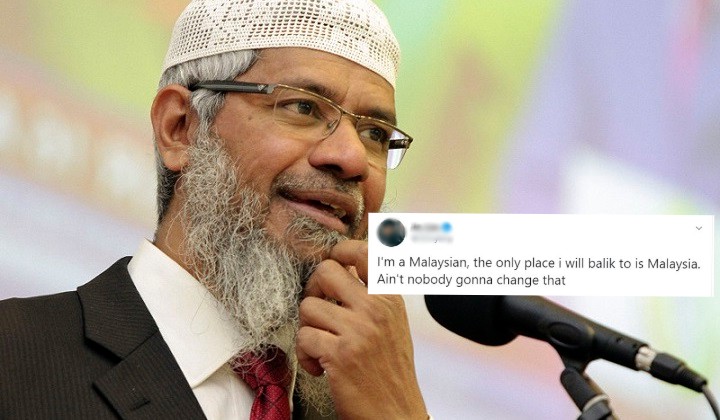 This week, fugitive Islamic preacher Dr Zakir Naik was the topic on everyoneâ€™s lips as news spread fast and wide on his remarks calling Chinese Malaysians â€˜old guestsâ€™ that should go back if the nation wants new guests to go.

“You know, someone called me a guest. So I said, before me, the Chinese were the guests. If you want the new guest to go first, ask the old guest to go back.â€

â€œThe Chinese aren’t born here, most of them. Maybe the new generations, yes.â€

â€œYes. An attack on our Chinese and Indian brothers and sisters is an attack against all Malaysians.â€

â€œItâ€™s ridiculous to even think that my fellow Malaysians are my tetamu. They are my family for God’s sake. Enough is enough.â€

Despite the racially charged squabbles of the past few
weeks, this incident has created a movement online where Malaysians of all
races were coming together to unite and supporting their fellow countrymen.

Hereâ€™s some of the heart-warming (and funny!) messages of unity we found across Malaysian internet:

Translation: Chinese Malaysians are NOT GUESTS, but Malaysian citizens who love this abundant nation.
Malaysia’s strength is the unity of her people.
Enough with questioning our unity and loyalty.
I know many Chinese & Indians willing to die defending our beloved nation.

They are MY family.

Sorry Zakir Naik, they are not guests. They are FAMILY.

Translation: My Chinese boss today: “Tension lah with this whole Zakir Naik situation. Where does he want me to go back to? My kampung is Subang Jaya ah! And my president is Joe Flizzow!!!”

This is my neighborhood. We have Chinese, Malay and mamak eating together. #BangsaMalaysia pic.twitter.com/OOWoOXXClL

I’m a Malaysian, the only place i will balik to is Malaysia. Ain’t nobody gonna change that

Translation: This is Malaysia, the home of Malay, Chinese & Indian. It’s normal for siblings to fight & have different opinions. Who are you?

Dr Zakir Naik has crossed the line with his latest remarks. Itâ€™s totally indefensible. We canâ€™t condone that. Our Indian and Chinese brothers are legit citizens of this nation state.

â€œTetamu lamaâ€ Cina mereka ni family. Personally, in my family as well. Born and grew up here, nak suruh diorg balik mana? Yes weâ€™ve had differences in the past, and evidently now, but they will remain as part of keluarga Malaysia.

You are not.
And no longer welcomed here. https://t.co/rTha1XtGxh

Translation: The Chinese and Indians were involved during the fight for independence and also the formation of the Federal Constitution (Prof Shad Saleem)
And when Malaysia was formed, they were also a part of the society known as ‘rakyat’ and voted in the first election.
Zakir Naik arrived as a fugitive and then became a guest. Not involved in nation building and now disturbing national peace.

Translation: If you ask Chinese Malaysians “Where are you from?” They will answer Ipoh. Seremban, Alor Setar or Malacca.
If you ask Zakir Naik the same question, what will he say?
Don’t cause trouble lah. Why do you want to plant seeds of hate?

These are my Chinese friends. They are not just a â€˜guestâ€™ in Malaysia. They are my family. They are the rightful Malaysians.

And you sir, are not.

Watch what you say and donâ€™t disrespect my fellow Chinese friends like that. I choose them over you.

The Chinese and Indian who were born here aren’t our guest as we formed Malaysia together. Zakir Naik, you’re the “guest” and you have to leave https://t.co/F41syyCAW5

Zakir Naik : Before chasing me, ask old guest to go back first.

Also Malay: Who do u think u are? Asking a legal citizen to go back. U go back la..

The government of India made a formal request to the Malaysian government in June 2019 to send back its citizen, Zakir Naik, to face money laundering charges at home.

In 2016, his foundation was banned in India following allegations of promoting religious division in the country.

The controversial preacher was granted a Malaysian PR back in 2015. Despite the official extradition request, Prime Minister Dr Mahathir Mohamad said that we cannot send him back for “fear of being killed.”

Numerous ministers have also called for unity together with the deportation of Zakir Naik. However, it remains to be seen how the Malaysian government will react officially.

Despite it all, it feels good to know that Malaysians can be full of love and support for one another.