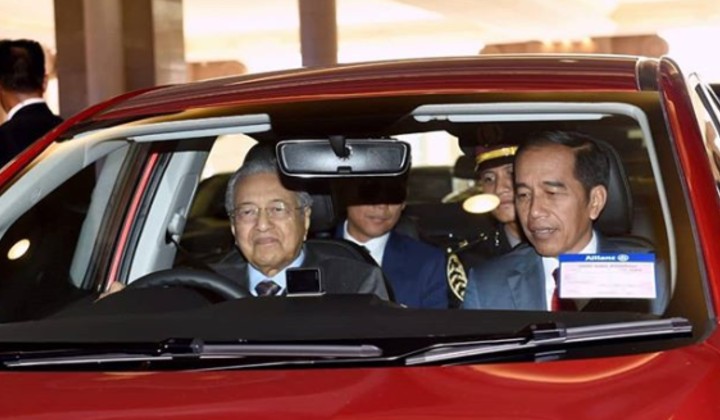 In the latest episode of Politicians in Cars getting Lunchâ€¦

Indonesian Presiden Joko Widodo was psyched to be taken on a drive through the streets of Putrajaya by none other than our own Prime Minister Tun Dr Mahathir Mohamad.

In a posting made on Instagram, Jokowi shared his excitement and gratitude for being chauffeured for the second time by Tun M during his two-day visit to Malaysia over the weekend.

Previously, Tun M had taken Jokowi on a test drive in a Proton at the Sepang race circuit back in 2015, which the president remembers fondly.

During the short drive, the two world leaders even took time to record the joyful moment sharing it through vlogs on their official social media pages.

The two were reportedly on their way to lunch hosted at the Seri Perdana residence.

Jokowi seemed rather over the moon, impressed by the 94-year-oldâ€™s skills behind the wheel of a bright red Proton Persona as well as how the prime minister was steering Malaysia into the future.

â€œIâ€™ve been invited by the Prime Minister for a drive. He is driving and heâ€™s going quite fast.â€ said the premier in a 1-minute 22-second video posted on YouTube.

Jokowi also admitted that he was more comfortable on two wheels rather than four, saying that it has been nearly 15 years since heâ€™s ever held a steering wheel.

To which Tun M responds saying that nothing gives him more joy than driving on the open road.

You can catch the full drive on Jokowi’s official YouTube here:

Or catch Tun M’s recording of the historic moment on his official vlog here: