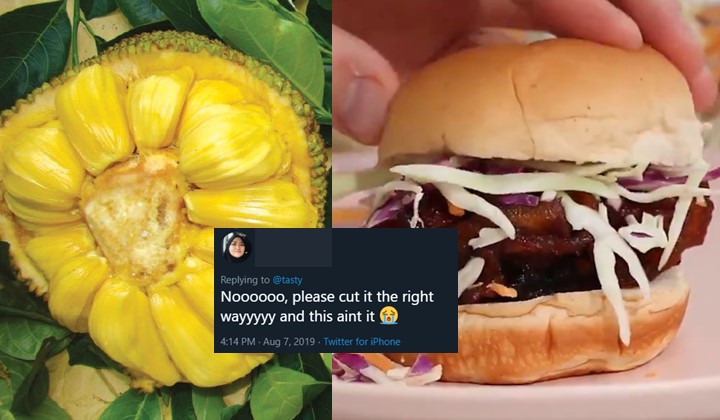 Recently, the well-known recipe channel Tasty decided to try their hand at introducing jackfruit to their audience.

Naturally, this caught the attention of Malaysians… but for the wrong reasons.

You know what it is, but do you know how to cut a jackfruit? pic.twitter.com/g7yg5zzyAL

Malaysians watched in horror as the first half a minute teaches viewers to cut the nangka straight through.

As an asian, I cringed.
That is not how to cut a jackfruit.

Tasty wasn’t alone in not knowing how to cut jackfruit properly, as Whole Foods was recently slammed for selling the fruit cut like watermelon.

Tasty then recommends a recipe using the jackfruit to make vegan pulled pork, which includes:
– cooking it in vegetable stock for 45 minutes
– baking it for 75 minutes
– putting vegan bbq sauce on it
– baking it for another 15 minutes
– serving it on a bun with coleslaw

Though some sources claim that jackfruit “tastes like pork”, it is most likely because the fruit is commonly used as a meat substitute due to its fibrous texture that started its association to pork meat.

Naturally, Twitterjaya went on a rampage.

Most Twitter users chalked it up to another White People Thing.

the whites are at it again

Twitter user Noe ended up creating a video of their own with the actual way of cutting, frying, and eating cempedak (and the same way of cutting applies to nangka as well).

Although we commend the New York-based cooking channel for trying out exotic fruits, many wish they could have introduced the beloved Asian fruit in an authentic manner.

In an earlier version of this story we got nangka mixed up with cempedak. YES, WE KNOW. YES WE SEE THE IRONY. Very funny, haha. We apologise for the mistake.

Expensive Chicken? Here’s An Hen-semble Of Foods That Taste Just Like Em’