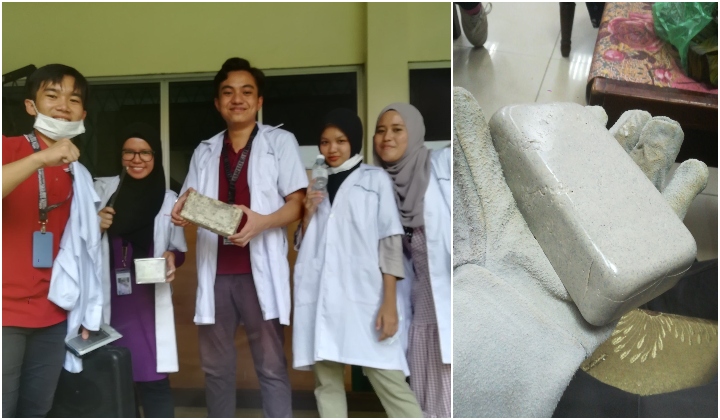 While most of us are sitting around complaining about plastic pollution and secretly judging those who arenâ€™t practicing #ZeroWaste, a bunch of university students from Politeknik Kuching Sarawak are busy coming up with a solution!

Twitter user @chelompelom recently went viral after sharing what he and his group mates have been working on.

Not into the whole metal straw thingy but we still wanna save the turtles..just in a different way.
This is a brick made of 70% plastic waste made by my friends and I for our FYP.
Our aim is to reduce plastic waste and turn it into smth else. pic.twitter.com/BQsY3FoV3L

Jerome Emmanuel a.k.a @chelompelom and his final year project group mates, Nur Syafiqah, Nur Mastiqah, Ros Amirah, and Fakhrul Azeem are in the process of creating a brick mainly made up of recycled plastic!

Distressed over the environmental impact of plastic waste, the five petrochemical engineering students were brainstorming for ideas for their final year project.

Then, one of them stumbled upon a project where bricks were made by compressing plastic bottle pieces and sand together.

They decided to take it a step further.

So, after a month of research we finally came to a conclusion that this is how we want to utilise plastic waste.â€

Their brick is mainly made up of recycled Polyethylene terephthalate (PET) plastic bottles cut into tiny pieces.

Jerome told us that the one brick was made by mixing 1.3kg worth of recycled plastic with river sand, fine and coarse gravel and calcium carbonate.

â€œFirst of all, the dried plastic pieces are put into a metal container strong enough to withstand heat. Then, we put it on a gas stove because the furnace in our lab isnâ€™t big enough so we had to improvise.

As for the dry materials we add them all together in one container.

Once the plastic is boiling we add the mixture (of dry materials) into the melted plastic until it looks like a proper mixture (homogeneous). No clumps whatsoever.

Then finally, the mixture is put in a brick shaped container until full.

Then its just a waiting game lah. Let it cool for about 1-2 hours.â€

Although Jerome makes the whole process sound really simple, creating a stable brick wasnâ€™t a walk in the park for the team.

â€œThe one in the picture is our 3rd successful brick after minor adjustments from its predecessors.

At first, the other materials used were sand and gravel only, to strengthen it (the brick).

Then after doing some research on similar types of bricks, some companies/researchers added calcium carbonate. So we used that and it turned out like in the picture (tweet)â€

While this brick looks impressive to us, Jerome assured us that itâ€™s not perfect (yet). There are still some tweaks needed to produce a strong brick thatâ€™s suitable for construction.

â€œThe one in the picture has cracks in it because we experimented with super cooling a.k.a. putting it in a water bath.â€

We wish the five group mates all the best in their project! They already got an ‘A’ from us!

Things Malaysians Are Already Doing To Save The Environment