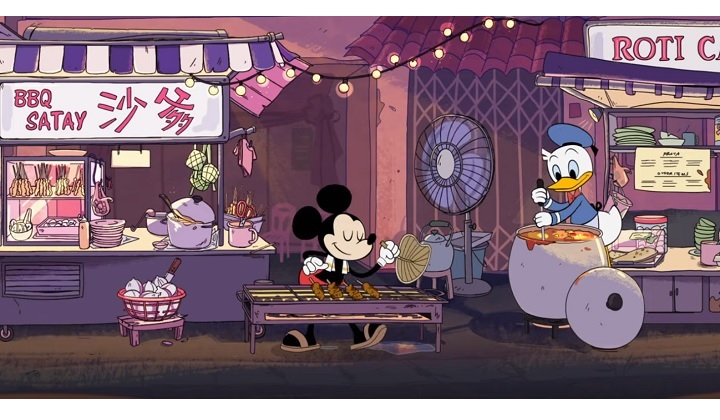 Growing up watching the Disney Channel on Astro, the closest
we ever got to a local Disney show was Disney Buzz.

But looks like thatâ€™s about to change with a new Disney cartoon set in Malaysia/Singapore starring Mickey Mouse and his friends!

According to Malay Mail, Mickey Go Local is a new series by Disney where Mickey, Minnie, Donald, Daisy and Goofy explore Malaysian and Singaporean food, clothes and architecture across 6 episodes.

The 2-minute episode centres around Mickey Mouse &
Donald Duck fighting over getting Goofy to eat at their food stalls- where
Mickey runs a satay stall while Donald runs a roti canai stall.

The comment section was full of appreciative locals, who couldnâ€™t
help but beam in pride at the representation of our culture.

Young (and old) TV watchers will soon enjoy Master Hawker on their home screen as it will be aired on Disney Channel starting from tomorrow (7th August).

The second episode, premiering on 30th August, will be called Peranakan Spice and that sounds REALLY delicious!

There will be more shorts released over the months until January 2020, so we will have more cute local Disney cartoons like this to enjoy!

Meanwhile, you can watch the Mickey-Donald-Goofy food fight
below: