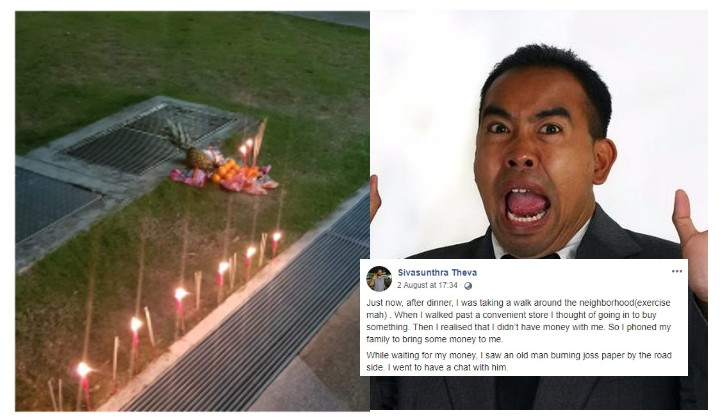 Youâ€™ve probably started seeing an increase in remnants of joss sticks on the ground, next to a pile of ashes, or maybe even seen your neighbours burning papers in the evening.

Yes, friends. Hungry Ghost Festival is upon us.

While this spooky month is usually flooded with creepy ghost
stories, we find ourselves doubling over in laughter as Facebook user Sivasunthra
Theva shared a tale that was more humorous in spirit.

The poor fella was mistaken for a ghost!

Sharing the hysterical tale on his Facebook account, Siva was out for an evening stroll around his neighbourhood when he passed by a convenience store.

Feeling the pull to buy something, the cashless Siva called
his family to come over and pass him some money.

So, heâ€™s there. Waiting all alone when he spotted an old man burning joss papers by the roadside and decided to have a chat with the unsuspecting soul.

This is when Siva made a boo-boo.

â€œWhat are you doing here? â€ I asked him.

â€œI am sending money to my familyâ€ he said.

Then he asked me, “What are you doing here?â€

â€œI am waiting for my family to send money to me.â€

Upon hearing Sivaâ€™s reply, the colour quickly drained from the poor old manâ€™s face and he RAN FOR HIS LIFE.

Siva quickly made a second boo-boo.

I shouted to him, â€œHey, donâ€™t run! Iâ€™m just waiting for my family to send money to me!â€

Then, EVERYONE burning joss paper nearby also ran away!

In case you missed the joke, the people who ran away thought Siva was a ghost waiting for his family to send him money during the Hungry Ghost Month.

According to Chinese belief, the gates of the underworld opens during the 7th month of the lunar calendar and restless spirits roam the earth.

During this time, many Chinese people burn hell money and paper offerings, such as cars, watches and jewellery, to appease their deceased family members and as care of their material needs in the afterlife.

Sivaâ€™s story tickled more than a few bones as it had amassed around 7,500 shares and 2,700 comments on Facebook at the time of writing.

Moral of the story: Be careful what you say during Hungry Ghost Festival.